As the summer holiday season draws to a close, at Cheshire Record Office we've been looking through our travel-related archives and thinking about travel plans from yesteryear.

Holiday planning in 2018 often starts with an internet search for ideas of where to visit, but of course this was not an option for our ancestors.  An 1878 catalogue of travel literature from the Chester Free Public Library may have provided some inspiration.  The Voyages, Travels and Adventures section covered all the continents of the world, but also included trips not too far from Chester such as Dr Samuel Johnson's Diary of a Journey into North Wales, in the year 1744, or Rev. Richard Warner's Tour through the Northern Counties of England and the Borders of Scotland.  For something further afield, readers could have looked at Lady Grosvenor's Yacht Voyage to the Mediterranean and those thinking of travelling east may have been interested in Narrative of a Three Month's Voyage in India.  The author was 'The wife of an Officer in the 16th Foot' - her actual name was sadly not recorded! 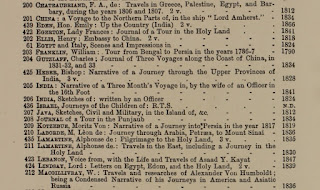 Once the destination has been decided on, it's always worth checking your travel documents. Anyone who has endured the nail-biting wait for a passport renewal in time for a last-minute booking will know this well!  We have some beautiful examples of passports granted to travellers in centuries past, such as 'English Gentlemen' Samuel Hill and Daniel Lombard whowished to travel to Savoy in France in 1711, or one for another 'Gentilhomme Anglais', a Mr Hallowes, whose passport was signed at Downing Street in 1824 decorated with a large detailed drawing of a crest. 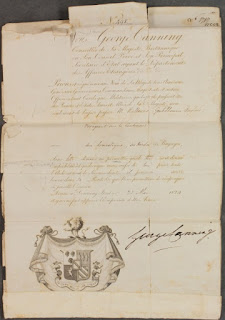 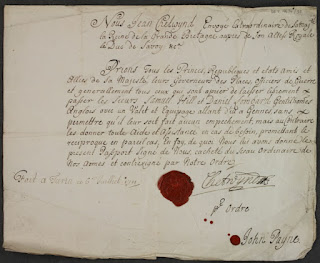 France is an ever-popular holiday destination for British people, and with Eurostar, Eurotunnel and hour-long ferry crossings we are spoiled for choice on how to get there.  Compare this with the slower experience of a traveller in 1719, whose journal begins:

After a four Dayes waiting at Dover for a wind, we at last found a favourable one that brought us in 5 Hours thence to Calais.

Cheshire Record Office holds countless other documents about travellers' journeys.  The journals and letters of Francis Dicken Brocklehurst of Macclesfield include a lyrical account of his voyage across the Pacific Ocean, from California to Australia, Ceylon, China, Japan and India in 1860.  11th February 1860 seemed to start well:

The wind continues good.  We are on the same latitude with the Sandwich Islands about one thousand miles east of the same.

But later in the day conditions changed:

7 o'clock p.m. Strong wind blowing, black angry clouds drifting swiftly across the heavens, a few stars glimmering fitfully here and there, the ship heeling uncomfortably over on the starboard side as she ploughs her way steadily through the heaving and surging billows which roar with a threatening and somewhat onimous sound that almost drowns the thin but plaintive tones of a concertina, which the first mate is playing forward on deck somewhere.

When Mr Brocklehurst arrived at Melbourne the following month however, anyone who has ever been disappointed with their hotel or been tormented by tropical insects will understand his feelings.  He notes on 28th March that,

the hotels are scarecely third rate and infested with mosquitos,

and goes on to complain the day after that,

the beds in all the Hotels in Town are infested with bugs. Had to sleep on the floor in my travelling blankets last night in consequence.

the Bugs and Mosquitos have fairly driven me from the Criterion Hotel and I have now located myself at the Prince of Wales.

If we're holidaying abroad, currency exchange rates can make it tricky to keep track of spending money.  Lord Egerton of Tatton was careful to keep an eye on what he spent and made notes in the back of his travel journal for hotel, rail and luggage expenses, but also the cost of tea, how much he tipped the porter and more than one purchase of Eau de Cologne! We have also found an early reference to currency exchange rates in a diary printed in 1871.  An Average Value in English Currency was given for 'foreign money' including the French Franc and Sou and Austrian Florin and Ducat, as well as the interesting-sounding Spanish Hard Dollar and Doubloon and Turkish Gold Sequin. 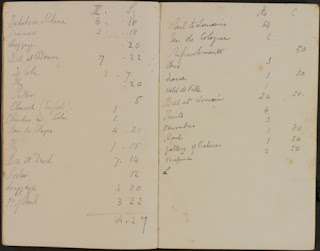 At the end of our holidays we all like to look back on our holiday snaps but before we all had cameras on our mobile phones, travellers and holidaymakers had to be a little more creative.  The notebooks of Lord Egerton feature sketches as varied as cathedral stained glass windows, a statue of Buddha and local characters such as one captioned the Landlord of the Trierscher Hof, waiting at Table d'Hote. 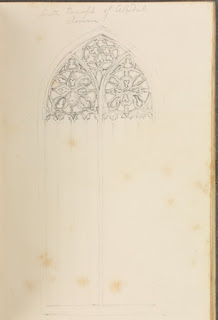 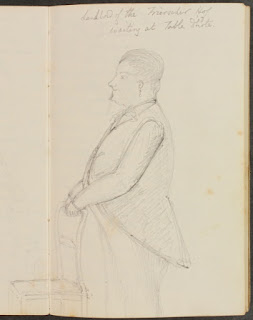 Drawings and even paintings feature in the Brocklehurst family papers.  Examples from T.U. Brocklehurst's travels include a painting of Mont Blanc and a picturesque view of Mexico City. 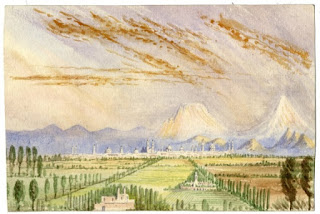 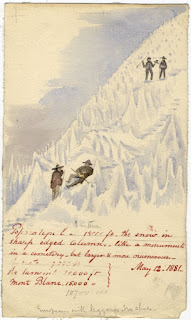 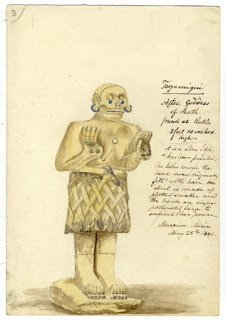 There is also a detailed painting of something he saw in a Mexican museum in 1881, captioned:


Teoyamaqui, Aztec Goddess of Death, found at Puebla, 3 feet 10 inches high.  It is a stone idol and has been painted.  The holes around the head were originally filled with hair.  Her skirt is made of plaited snakes and the hands are disproportionately large to indicate her power.


As far as we know, it wasn't brought home as a souvenir!

All of these items and more are available to view at Cheshire Record Office in Chester.

Posted by CheshireRO at 15:24 No comments: