Last week, Part One of our blog on Cheshire Libraries looked at the job of Librarian and at people's appreciation of their local library.  In Part Two we look at how libraries have changed over the years - and you can check how well your local library was doing compared to others in Cheshire!


All librarians have to contend with the occasional late return of their library's books and this was clearly the case in days gone by as well.  Library rules found on the back of a 1930s application for Neston Library states quite fiercely that,

"All books must be returned within 15 days...under a FINE OF ONE PENNY FOR EACH DAY THEY ARE RETAINED BEYOND THAT DATE."

Most libraries today have embraced technology and have self-service machines to issue and return books, but many of us still remember library tickets such as these 'new' borrowers tickets issued to Bollington Library at the time of its reorganisation in 1934. 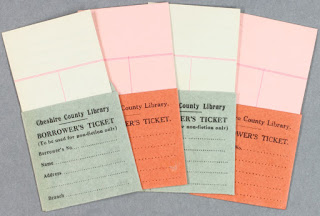 ﻿
﻿
Another big change is how family-friendly most libraries are these days, with Rhyme Times, the Summer Reading Challenge and a host of other activities for children on offer across Cheshire Libraries. Compare this with number 18 of Neston Library's rules in 1934:

"Borrowers' Tickets will not be issued to persons under the age of 11 years."

Documents held at Cheshire Archives show how meticulous librarians were at keeping records, with issues big and small noted in many different library committee books.  Some kept records not only of which books were borrowed, but also categorised who their borrowers were.  Going back to the Librarian's Report Book of Middlewich Library, the first annual report of 1891 recorded the occupations of their borrowers which included seven butchers, 15 milliners and dressmakers and 137 scholars - as well as 180 people categorised as Wives and Daughters! 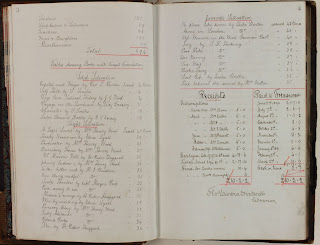 It also recorded the year's most popular books, or books with largest circulation.  In the 'Light Literature' section A Life's Secret by Mrs Henry Wood was borrowed 40 times and for Juvenile Literature the Julia Donaldson of the day was a writer called Hesba Stretton - her book No Place Like Home was issued 43 times, and she also had two other books in the top ten.


What is evident across our records is how the reach and popularity of libraries grew over time.  This annex to the Report of the County Librarian from 1933-34 shows how many books Cheshire's Libraries held and how many books they issued.  Alderley Edge, Bollington, Handforth and Sandbach all issued over 4,000 books but bigger libraries like Alsager and Wilmslow issued over 10,000 and 18,000 books a year. 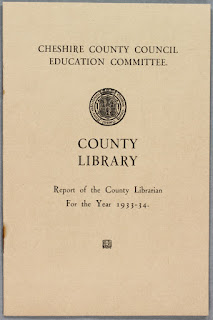 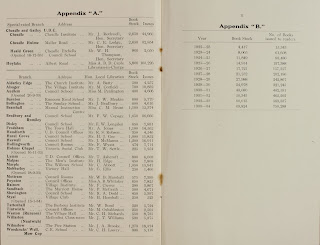 Can you find your local library on the list?  We wish you a long and happy membership of your Cheshire Library!


All of these items and more are available to view at Cheshire Record Office in Chester.
Posted by CheshireRO at 09:43 No comments:

Libraries Week takes place each October to celebrate the nation's much-loved libraries.  Here is a flavour of some of the archives held at Cheshire Record Office showing how libraries have changed over the years, and how they have been bringing communities together for centuries in a love of books and reading.


We have an account of how pleased people were to have the Free Public Library opened in Macclesfield. Published in 1888 and gathered from coverage in the Macclesfield Courier and Herald newspaper, A Walk Through the Public Institutions of Macclesfield (ref: 010285) states that,

"Through the munificence of Mr. David Chadwick, formerly M.P. for the borough, Macclesfield possesses a free library and reading room quite commensurate to the wants of the inhabitants."

On the day the library ownership passed to the town,
﻿

﻿
"A procession was formed and thereafter proceeded from the Town Hall to Park-green, where Mr Chadwick handed a gold key to the mayor in token of possession of the building...the library was opened amid loud huzzahs."


People's appreciation of their local library can be seen in the care they took of its books.  In 1896 the librarian at Middlewich recorded that,

"The Result of Stock-taking this year is highly satisfactory.  Though the library has been in existence for more than seven years, not a single volume remains unaccounted for, and less damage has been done to the books this year than during any previous year." 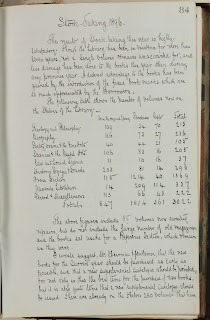 However all libraries will occasionally have borrowers who do not take as much care.  Nantwich Library's Committee (ref. LUN 5/6) dealt with this in 1930 when it resolved that,

"Printed notices threatening the prosecution of persons cutting and defacing papers and magazines, be obtained and exhibited in the Reading Room."

Three years later damage had moved on to theft, when the Committee decided to have

"A notice exhibited in the Library offering a reward for information leading to the apprehension of persons removing books and papers from the Reading Room."

At Knutsford, the Library Committee (ref. LUK 4906/2) decided in 1908 to restrict lending to people who didn't take care of their books:

"In the case of books being returned in a damaged condition the Librarian should report at once to the Committee, and refuse further books to the borrower."

At that time, libraries had to consider the health of their borrowers as well as the books.  Neston Library's rules (ref. LUNe 4797/9) note in bold type that, 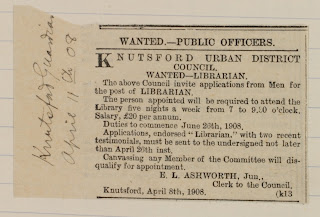 We are lucky to have better medical treatments available nowadays, and also to have fairer conditions at work.  The records from Knutsford Library's Committee book shows - in the days before anti-discrimination laws - that the resignation of a Miss Darlington as Librarian was discussed at the meeting of March 30th 1908.  Less than two weeks later an advert appeared in the Knutsford Guardian: "WANTED - LIBRARIAN. The Council invite applications from Men for the post of LIBRARIAN."

A committee meeting at Nantwich in November 1933 noted the Librarian vacancy caused by a Miss Price's resignation but the next meeting resolved,

"That the Committee be recommended to advertise for applications for the position of Librarian (male or female) at a salary of £120 per annum, out of which the Librarian must provide and pay all assistance he or she may require in carrying out the duties of the office other than the cleaning of the premises...The hours of duty be 9am to 8pm."

With these terms and conditions, perhaps the Committee was asking quite a lot!

In Part Two next week we will look at how libraries have changed over the years, and you can see how well your local library was doing compared to others in Cheshire.  For now, we wish you a Happy Libraries Week!

All these documents and more are available to view at Cheshire Record Office in Chester.

Posted by CheshireRO at 15:24 No comments: