From Prejudice to Pride - Cheshire's LGBT Past

In October 2017 Cheshire Archives and Local Studies embarked upon an exciting new heritage lottery-funded project, ‘From Prejudice to Pride’, in collaboration with the LGBT group Silver Rainbows and the sexual health charity Body Positive Cheshire and North Wales. The aim of the project is to preserve the rich and varied LGBT+ history of Cheshire.

Over the last few months we have been eagerly researching our collections in order to identify items with an LGBT+ connection. We hope that by uncovering the wealth of records in our collections that reflect LGBT+ lives, histories and culture, we can help to make Cheshire’s LGBT history more widely known and accessible.


Male homosexuality was illegal until the 1960s and there are plenty of criminal records to use in researching this subject. For example, we hold various records relating to the famous trial of Alan Turing and Arnold Murray in 1952.

We found that local newspapers were an excellent source of information for pinpointing other trials and criminal cases. For instance, we were able to learn about the shocking incident in Warrington in 1806, whereby a group of twenty-four men were arrested for homosexual offences, nine of whom were eventually tried and two of whom were hanged.

Records relating to male homosexuality are not limited to court records. Before the passing of the 1967 Sexual Offences Act many blackmail attempts involved a threat to expose a man as a homosexual, whether or not he were in fact gay. In one of solicitor’s collections we discovered the letters, photographs and other personal effects belonging to a gentleman in Warrington. One of the letters, written in French and sent prior to the outbreak of the First World War, seems to be an attempt to blackmail the recipient into paying for medical treatment.

The author of the letter suggests “you know well what happened to me at your house” and demands a payment of 200 francs. He ends by threatening “if you don’t do it, I shall have justice.”

Unfortunately, many records relating to LGBT history are hidden within collections and can be challenging to find. It can be particularly tricky to find records of female homosexuality, as this was never officially criminalised. However, even in the short time we have spent working on this project this hidden history has revealed some surprising and inspiring stories!

There are many historical cases of women who cross-dressed or passed as men in order to live with their female partners, but in some extraordinary cases it seems that these relationships were not concealed at all. This incredible record shows the marriage of Hannah Wright and Anne Gaskill at Taxal Parish Church in 1707. Again, in 1750 Sarah Richardson, “commonly known as Peter”, and Maria Sproston were married by publication at St Michael & All Angels, Middlewich.

Unfortunately we can’t know for sure the circumstances surrounding these marriages, but this does not make them any less captivating.


Cheshire also has a rich history of LGBT activism. The Campaign for Homosexual Equality (CHE) was a democratic voluntary organisation founded in 1964 with the aim achieving full legal and social equality for LGBT people in England and Wales. At one time the Chester group has over 240 members and was the biggest in the country. Meetings were held at various venues across Chester, including the Blossoms Hotel and the Bear & Billet. 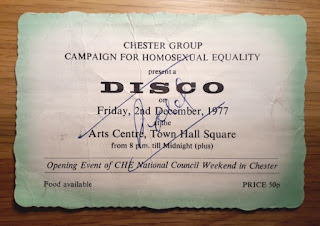 The records of the Chester Campaign for Homosexual Equality group are currently held at the London School of Economics Library, but we hope that this project will encourage local residents to donate their collections of CHE records to Cheshire Archives.

The following article from a 1975 copy of the Cheshire Observer gives a fascinating insight into life within Chester CHE.


These are just some of the fascinating records that we have discovered over the last few months – we plan to produce a new comprehensive collections guide to Cheshire’s LGBT records towards the end of the project, and of course much more LGBT history remains still hidden in the Archives.

If you have information relating to the LGBT community in Cheshire, or relevant material to add to the collections, we would be delighted to hear from you. Please telephone 01244 972574 or email rebecca.farmer@cheshiresharedservices.gov.uk for more information.

Some of the items mentioned in this article will be on display in our searchroom from 29th May to the 1st June, along with a series of banners telling key stories from Cheshire’s LGBT history.

Posted by CheshireRO at 09:44 No comments:

Lots of our collections include records of the manor courts dating from the 1300s right up to the early 1900s. They provide the earliest history we have of local administration with details of court proceedings, names, local rules and land transactions often in long runs of consecutive years. In addition to this, manorial records can also include maps and surveys, providing material for geographical research. The aim of this one year project is to establish a definitive list of Cheshire's manorial records, and share the stories they can tell us along the way.

On opening my first box of manorial documents at Cheshire Archives and Local Studies, I was faced with a particularly interesting excerpt of Orders for Bidston, Moreton and Saughall Massie from the early 1800s. Not least because the first note of fines related to escaped pigs: ‘all persons suffering their pigs to wander or go abroad or astray within the said Manor’ were charged two shillings for the offence. More notable is the inclusion of the word ‘fender’ from the second paragraph onwards. It was a word which I hadn’t come across before in this context and as such, took me a small while to ensure that it wasn’t simply a long ‘s’ beginning the word.

According to Brownbill’s ‘History of the Old Parish of Bidston, Cheshire’ the act of ‘fending’ was to clear watercourses or fenders, suggesting that a fender was a sort of drainage channel.

‘We present Ellen Wharton to fender her fender from
Arthur Godwin’s Car to James Pover Black Meadow or pay
to the Lord of the Manor 1s6d per rood for each rood not done by
the first of June next.’


Ms Wharton was not the only individual charged with fendering her fender; there is even a court order requiring people to place boundary stones along fender road to make clear which part they are liable to fix – the charge for not doing this was five shillings per offence. Other orders include instructions to ‘ditch a ditch’ and to build a bridge, the latter of which would face by far the largest fine of one pound and 19 shillings if not completed in the given time frame.

The document highlights the importance of maintaining manorial lands at this period, in this case with particular emphasis on the watercourses. This document refers largely to Bidston, which is situated in the Wirral Peninsula. Given that the land in Bidston is sandy, low-lying and mostly flat, this would account for the need for strict rules on maintaining fenders and may explain the emphasis in this document. In any case, it’s clear that the fines for not maintaining fenders and ditches could be particularly costly, especially for those with large areas of land.

What is interesting to note in this document is that each offence is charged the same regardless of the gender of the individual. The order for each offence simply mentions the individual charged and the amount that they will be liable to pay if the order is not completed. Considering that at this point in time, women were unable to vote and that the Married Women’s Property Act, which granted women the right to own land wasn’t passed until 1870, it is very interesting to note how ‘matter of fact’ the orders are when relating to women. It seems at least, in the obligations of local manor courts, men and women were treated equally. The sums are high for not abiding by the rules, which also suggests that women had access to decent sums of money if they were expected to meet these fines.

The list of Cheshire Manorial documents will be made available on the Manorial Documents Register at the end of this year, to find out more about the national project, please follow this link.

Posted by CheshireRO at 12:35 No comments: