Every week in April 2020 we have applauded the work being done by healthcare heroes and in the archives we have the records of celebrated local health hero Dr John Haygarth whose work in previous epidemics was not only far-reaching and pioneering, but also very close to the challenges and experiences of today.

The medical profession at the time of Dr Haygarth was in the early stages of understanding, learning to control and attempting to eradicate some of the most deadly infectious diseases which ravaged the population in the 18th century. His theory on fever control: isolation of the patient, good ventilation of hospital wards and thorough and systematic cleanliness and hygiene measures were ground-breaking.

Two early influences on his life were a brilliant surgeon, John Dawson who drilled into Haygarth the importance of keeping and making use of statistical data and William Cullen, a leading physician at Edinburgh with his teachings on fever.

Haygarth’s connection with Chester began in 1767 when he was appointed as a physician at the Infirmary and he was to work here for the next 30 years. Chester Infirmary was founded in 1755 for the treatment of the sick poor and you can still see registers of patients, their diseases and their outcomes in the Chester Infirmary collection at Cheshire Archives. 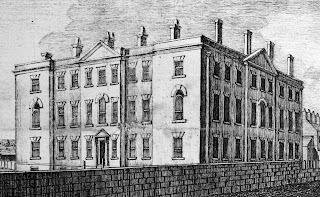 Throughout his time in Chester he worked on the prevention and control of infectious fevers. In 1774 he was appointed by the Assembly of Chester to conduct a survey of the health of the inhabitants of the city. He carried out detailed analysis on births and deaths in relation to living conditions. His conclusions were that the overall health of the city was good but there were high rates of mortality in some of the poorer suburbs where crowded and insanitary dwellings provided ideal grounds for disease to spread from person to person. He identified the places where people came into close contact through the congested narrow streets adjoining the city walls as particularly dangerous.

Haygarth wrote that 'the natural smallpox was so dreadfully fatal to the poor inhabitants of Chester as to produce a deep impression upon my mind, especially when I considered, that it was possible to prevent such destruction.'

He advocated innoculation on a large scale (this was controversial years before Jenner worked on vaccination) accompanied by 'rules of prevention'. Rules on control of fever included removing patients from their family home and isolating them in a specialist ward, utmost attention to cleanliness and washing of bedding and clothing and no mixing with fever patients.

As early as 1771 Haygarth had begun to make improvements that are recorded in hospital board minutes. Visiting was limited to nearest relations, warm baths were installed, and wooden partitions were replaced with removable curtains to separate the beds.

In 1784 he was instrumental in setting up the first specialist fever wards at the Infirmary. An entry from 15th June 1784 reads:

Success in fever wards at Chester encouraged the formation of dedicated fever hospitals in Manchester, Liverpool and London. In his published statistical work 'Observations in the Population and diseases of Chester in the year 1774', the remarkable patient outcome data in the Infirmary registers and innovation in hospital planning we can easily recognise the advances that we have come to know as contact tracing, social distancing, 20 second handwashing and catch it, bin it, kill it!