Next we move on to another unusual marriage. A reader was working their way through microfilms of the Chester Courant newspapers and stumbled across an article which caught their attention. They rushed to inform us of what they had found and again, we were unable to resist looking into the story behind it.

The article was a transcription and entitled ‘161 Years Ago’. As we do not have copies of the Courant dating back to 1753, we relied on the article from 1914 to inform us for the next part of research. It detailed how a marriage took place between a ‘Mr Robert Allen, an eminent Pawnbroker, aged 75, to Miss Catherine Powell, of about 17...’ at Chester St Bridget’s parish church. It goes on to compliment Catherine on her stellar qualities and remarks that it is these qualities ‘...which will render the Marriage state very happy...’. 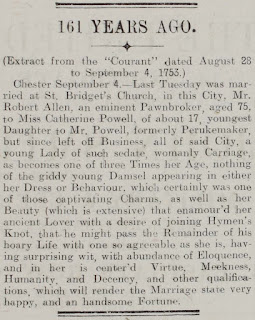 This information then allowed us to find Robert and Catherine’s marriage using the Cheshire Collection on Find My Past. The couple were married at Chester St Bridget’s parish church on 28th August 1753. The entry in the marriage register gives nothing away as to the age of the couple, so without our prior knowledge from the newspaper article, the marriage wouldn’t have appeared unusual at all!

Although the marriage entry did not state that the couple were married by licence, it seemed like it was worth looking into because of the age difference. By simply entering Roberts name and marriage year into the section for Cheshire marriage bonds and allegations on the Cheshire Collection, we were able to see straight away that Robert and Catherine were indeed married by licence. This was issued on 22nd August 1753, 6 days before they were to be married. The sum to be paid if the marriage did not meet the requirements set by law was £100 which is a substantial £8,500 in today’s money! 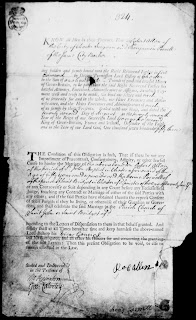 The marriage bond itself has its own quirks and adds to the exceptional nature of this marriage. First of all, Robert is listed as a Surgeon, whereas the newspaper article states he is ‘an eminent Pawnbroker’. Quite different professions we are sure you will agree!


Secondly, the licence states that Robert is aged ‘fifty years and upwards’. Exact ages were not always given on marriage bonds, or in marriage registers for that matter. However, the more common phrases tend to be ’over 21 years of age’ or ’21 years and over’ owing to the fact that minors engaging in marriage without proper consent was an issue. Still, even the figure of ‘fifty years and upwards’ does seem to be stretching the description of Roberts age somewhat! Furthermore, Catherine is described as being ‘…of about 17…’ in the newspaper article we have already seen but as ‘the age of twenty’ on the marriage licence. Neither the marriage register nor the bishops’ transcript give an exact age for Catherine, so we can only assume that she is aged between 17 and 20 when she marries. Even so, three years difference does seem more accurate than the twenty five given for Robert!

It is quite clear from all documentation, especially the marriage bond, that Robert was of the parish of St John in the city, rather than St Bridget’s, which was his bride’s parish, and where they had their marriage ceremony. It seemed likely that Robert was going to succumb not long after his marriage due to his advancing years. A quick search on the parish burials section of the ‘Cheshire Collection’ revealed that sure enough, Robert was buried in St John’s churchyard on 14th July 1755. It doesn’t include his age, but, considering the century this happens in, and the pattern already in use in the burial register, this is not unusual.

We then went on to run a search on the section dedicated to wills and probate records on the Cheshire Collection. We were able to find a will for Robert written 7th July 1755, seven days before he was buried. In the will, Robert is described as being ‘Sick and Weak in Body but of sound mind…’. It then goes on to detail how he is distributing his estate. He leaves his wife Catherine £5, which is just over £400 in today money. This is a fair amount you may think? It is not until you carry on reading the full text that this amount comes into question. Robert leaves £20 to his grandson, £10 to his daughter and all of the remaining estate to his son, also named Robert. So perhaps Katherine did get a raw deal? 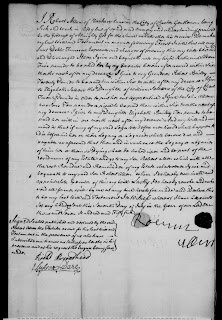 Our knowledge of Catherine stops at this point, but many questions are still to be asked. Did she bear any children? Did she re marry after Roberts death? How long did she live for and where was she buried? These questions will remain unanswered for now, but the temptation to look for her is there…
Posted by CheshireRO at 14:36 No comments:

The parish registers in our collections are amongst some of the most heavily used records here and have been made even more accessible through the introduction of the ‘Cheshire Collection’ on Find My Past . This accessibility has brought with it increased exposure to the records and the wealth of information within them. One marriage in particular sparked some interest and we could not resist looking into it further.

The marriage was stumbled across by a researcher in the marriage register for Mottram in Longdendale St Michael. It jumped out from the page thanks to its enticing title. It read ‘Behold! N:B: A peculiar Marriage!’ So what makes this marriage so peculiar? Perhaps it was because the marriage took place between a couple with a considerable age gap; one was aged 23 and the other 83! Some 60 years difference. What is all the more remarkable is that the groom, Daniel Broadbent, is the younger of the two. His spouse is named Martha Cheetham, aged 83 and they were married by licence on 9th March 1780 at the parish church in Mottram in Longdendale.

The couple had their marriage licence issued on the same day and the resulting bond survives in our collections. The fact that a licence was issued for the marriage to take place, as opposed to reading of banns in the church three Sundays before the wedding, is not unusual considering the age difference between the two. It details how a sum of £200, a staggering £15,000 in today’s money, was to be forfeit if the marriage was deemed unlawful. 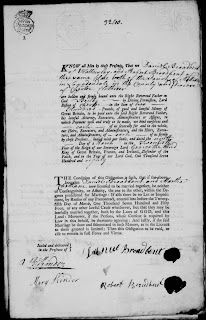 The surprises carried on coming when we discovered that one half of the couple died the following year. ‘What’s so surprising?’ you might ask. Martha was 83 when she married and 83 is a grand old age, especially in 1780. But think again. It is not Martha who passes away, but Daniel! His burial is entered into the Mottram in Longdendale burial register on 30th May 1781. 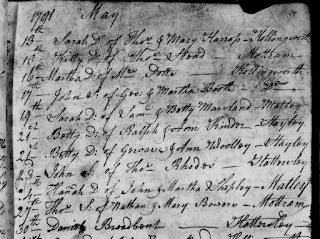 We think you will agree that this is indeed an unusual marriage to have come across. The search for more continues...
Posted by CheshireRO at 15:28 No comments: