The Papers of A W Boyd

I have only been working (as an Archives Assistant) at Cheshire Archives for two months but in that brief time, I have seen (and carried!) a lot of Electoral Registers, municipal minute books, great civic treasures, parish records, tithe maps – the list goes on and on. However, what I want to focus on here is the breadth of material from personal collections also held in the Archive. In another life, as a book collector and natural historian I am a fan of the Collins New Naturalist collection of books. I was therefore thrilled to find that the personal collection of Arnold Whitworth (A.W.) Boyd was housed here (Ref D 5154). Boyd wrote “A Country Parish” in 1951, one of the most personal and idiosyncratic of the early titles which is an in depth study of his local parish of Great Budworth in Cheshire. 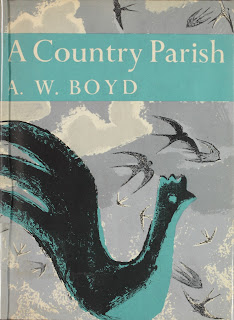 Upon consulting the catalogue a wealth of material presents itself. As this states, “Boyd was a naturalist and antiquarian with interests in local history, folklore, dialect and conservation.” This is very well illustrated within the papers and ephemera at the Record Office. Much of the collection relates to his wife’s extended family (the Conybeare and Markland lines). Outside of that, in itself fascinating, material, it’s like stepping into the mind (and desk) of a man with hugely varied interests. Don’t believe me? Then how about an “Autographed drawing by Edward Lear. Inscribed ‘He called and had no card in his pocket’.” (D 5154/8). Look again and there is a “Lady’s Riding Glove. Contains calling card of Miss Irene Conybeare claiming a date of 1680 for glove, which contains tag marked ‘Markland’.” (D 5154/30). 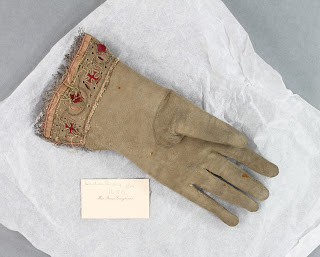 Elsewhere the collection includes early photographs of the Halton Soulcakers (D 5154/124) along with “Letters and notes relating to folklore, folk music and dialect” (D 5154/103), a personal scrapbook containing newspaper cuttings relating to cricket from when A.W. Boyd was 12 in 1897 (D 5154/95), and last but by no means least some “Photographic prints and negatives relating to ventilation features in farm buildings and the feeding of calves” from the 1930s (D 5154/125).
If your appetite isn’t sated after looking at this little lot, and you want to investigate A.W. Boyd himself a little deeper, the Archive also holds copies of his published works, along with several articles (many in Cheshire Life, bound copies of which are held on the open shelves in the searchroom) about the man himself and the observatory erected as a memorial to him at Rostherne Mere, and a “postcard from A.W. Boyd, Northwich to Dr H Terry, Bunbury concerning the different spellings of ‘Eddisbury’ and ‘Bunbury’ “(D 3277/11) .

One thing leads on to another, and then another, and then something else entirely. And that’s the point. As well as everything else we hold, we are full of treats and treasures like, but not really like at all, this fascinating and very personal collection. The problem is just where to begin.

Posted by CheshireRO at 09:48 No comments: