You know that moment when you bump into something which you thought only you had the vaguest interest in, and suddenly it all makes just a little bit more sense?  Well, that moment…

I was looking through some of our Local Studies collection relating to Birding and Ornithology when I fell upon a book by the Cheshire Naturalist T.A. Coward entitled Bird Haunts and Nature Memories (Reference 200289) from 1922. This is a handsome volume published by Frederick Warne, a collection of sometimes revised articles, many of which we are told originally appeared in the Manchester Guardian, Scotsman, Daily Despatch and Westminster Review.  Sadly which pieces appeared in which publication, and when, is not disclosed.  Many, but not all, of the articles have local interest and are focussed on Cheshire (or what was Cheshire) and the Wirral, with others relating to the North Wales Coastline.  I was initially fascinated by a lovely chapter on A Cheshire Bird (the Great Crested Grebe) as well as the rather poetic Memories of a Cheshire Moor which relates to Carrington Moss and proceeds from 1884 through 1894, 1904, 1914, ending in 1921, finishing with the somewhat unsettling sentence “Perhaps Carrington Moss was a better place forty years ago.” 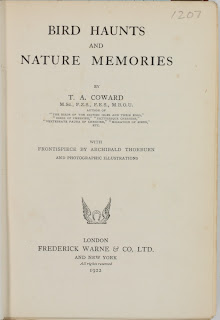 There’s also a fantastic piece (with photographs) entitled An Old Cheshire Wild-Fowler which describes the life of such an individual on the frozen Dee marshes near Sealand.  Much of this writing is very much of a different time.  In this article, Coward (a lifelong Ornithologist) resolutely defends the ‘sport’ (as he sees it) of Wildfowling.  The article even describes (in passing) the hunting of Spoonbills, which recent visitors to RSPB Burton Mere and elsewhere wouldn’t be very happy about
in 2017, I’m sure. 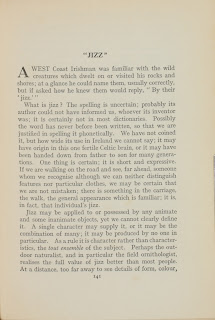 As for my interest in the term, I’m not really sure if this marks the beginning of the end, or the end of the beginning.  Perhaps I’ll just forget all about it for another twenty years or so.  Maybe if I could just find the original newspaper publication (if indeed there was one)…
And, finally, if you do have an interest in Ornithology, do please have a look at our catalogue and see what you can spot.  As well as our varied Local Studies collection of published material, we also have some fascinating Archive items that might interest.  One of my favourites is D4643/1 which is a notebook belonging to an Arthur Lewis of 28 Arkles Lane, Liverpool (literally just around the corner from Anfield, on the edge of Stanley Park).  This is a fascinating nature notebook from the first decade of the Twentieth Century in which young Arthur records his birding finds both in Liverpool and out on jaunts to the Wirral, and into both Cheshire and Wales.  This is the kind of thing he recorded: 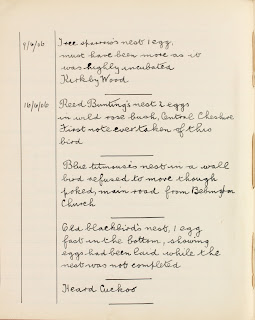 According to a note in the front of the book, Arthur later lived (and died) in Watergate Street, Chester.
Posted by CheshireRO at 13:07 2 comments: