With the Australian Open Tennis Championships in full swing and Six Nations Rugby about to begin, we’ve been inspired to look at sport-related items at Cheshire Archives and Local Studies.  We are fortunate to hold archive material from sports clubs across the county, featuring items from athletics to yachting (we don’t have any sports beginning with Z!)  This includes photographs of people taking part in everything from tennis and rugby to early examples of gymnastics and even roller-hockey.  In addition, Cheshire Image Bank is a collection of over 30,000 digital images of Cheshire people, places and events from anywhere that lies, or once lay, within the county boundary.  It can be viewed and searched online at www.cheshireimagebank.org.uk and the web site is a treasure trove for images of sport. 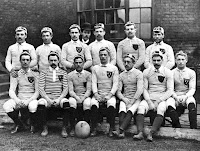 As tennis and rugby have prompted us to look through our sporting records, here are some Cheshire Image Bank photographs of each of those sports.  They show members of the Alexandrea Park Tennis Club in Hoole, Chester, during the 1930s (reference: P1620) and an early picture of Runcorn Rugby Football Club in the 1890s (ref: C02914).

We hold a much earlier record relating to football as well.  This document (ref: EDC 5/1608/70) is from Consistory Court papers of 1608, and concerns a libel case brought against a John Loram and a John Howell for playing at football in the churchyard at Dodleston on Easter Monday with brawling and fighting. 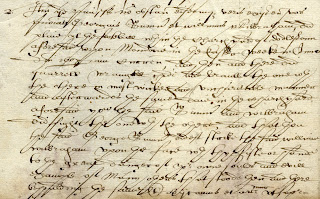 For those who don’t read seventeenth century English, it is just possible to make out the words football, Dodleston, quarrel and brawl! ﻿

It could be argued that cricket is the UK’s national sport.  As well as items such as team photographs and fixture lists, our cricket-related collections include these rules from Shrigley Vale Cricket Club in 1872 (ref: D 6265/37). We like rule number five which declares “that no fielder be allowed to lie down, or smoke during a game” as well as rule 10, “that any member swearing, using coarse language, or making himself disagreeable by his conduct on the field, shall be fined sixpence”.  Similar rules and etiquette can be found in some of our golfing records: this handbook from Prestbury and Upton Golf Club in the 1950s recommends the strict observance of a list of “unwritten laws” which “marks the finished Golfer and adds to the pleasure of one and all on the Links” (ref: 229413). 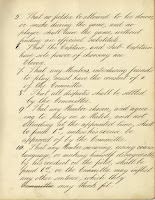 Athletics seems to have been popular for many years.  This 1899 programme from the Alexandra Athletics Club of Crewe celebrates their twenty-third annual athletic festival, and shows that the club was founded in 1866 (ref: 221494). We have various photographs of athletes: this early 20th century one is of Middlewich Athletics team - the number of medals some of the members are wearing suggests they were quite successful! (ref: D 7164) 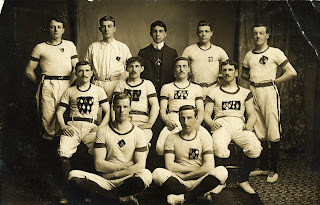 Other team photographs include these from a scrapbook of the Royal Chester Rowing Club (ZCR 419/3).  The one on the left is the club's 2nd VIII taking part in the North of England Head of the River Race in March 1957, on the River Dee.  We also like the one on the right, an old car loaded with a canoe captioned 'Henley 1937'.  Members of the rowing club certainly took part in the Henley Regatta - but whether that car was driven there from Chester, we do not know! 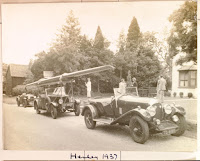 Amongst the records of the Knutsford Gas and Waterworks Company there is archive material related to horse racing at Knutsford.  This race card, giving details of the horses in each race and the jockey colours, is from 1854 (ref: D 4222/25) - and the photograph featuring the racecourse grandstand dates from the 1870s (ref: D 4222/26).

We also have photographs of some more unusual sports.  This is the Neston Quoits Team, photographed in 1895 (ref: D 6278/1).  And the impressive displays on the right (ref: CH1720) are by the Gymnastic Group of the Cheshire Regiment, photographed in 1902.

Along with many early photographs of men’s sports, we were pleased to find some of women’s teams as well.  A favourite is this one taken in 1915, of Widnes Ladies' Swimming Club (ref: C00344). 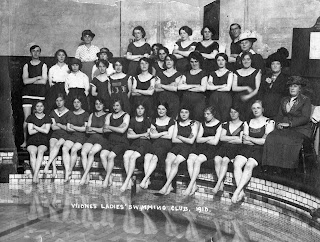 And finally, this picture taken between 1900 and 1909 is of the ladies roller-skating hockey team at the Empire Rink in Widnes (ref: C00342).  Roller-skating in those Edwardian dresses must have been quite a challenge! 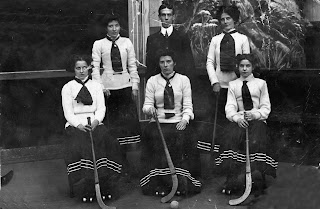 Records relating to a range of sports can be searched in the Cheshire Archives and Local Studies catalogue on our web site at http://catalogue.cheshirearchives.org.uk/calmview/ and can be viewed in our search room in Chester.  And for any local football fans, there will soon be a new exhibition in our search room display case.  From 4th February 2020, it will feature archive material from Chester City Football Club going back to the 19th century.  Why not come in and take a look?
Posted by CheshireRO at 13:40 No comments: