Did anyone see a lovely little piece on Springwatch earlier this year where documentary cameraman James Bayliss-Smith took off to Hilbre Island as a homage to his grandfather who took many bird photographs there, especially of wading birds stopping off on their way to their breeding grounds?  It got me wondering what we might hold here in the Archives relating to “Cheshire’s only Island”.  A quick search of the catalogue actually reveals 155 items listed under “Hilbre”.

If you don’t know of Hilbre, it (and its two smaller companions Middle Eye – sometimes, confusingly, Little Hilbre - and Little Eye) is “an archipelago consisting of three islands at the mouth of the estuary of the River Dee, the border between England and Wales at this point.  The islands are administratively part of the Metropolitan Borough of Wirral." At low tide the islands can be reached on foot from West Kirby. An image from the Ordnance Survey 1st Edition 25 inch (Sheet XII-6) from 1871 shows Hilbre Island Telegraph Station and the ‘Submarine telegraph’ line to the mainland

One of the earliest documents we hold that mentions Hilbre is  a copy (but an early one) of a seventeenth century Indenture (ref: EDD 13/5/1)

There are also many Local Studies items.  These include a large range of articles in Cheshire Life, a full run of which is housed on open access in the searchroom.  Many of these are by Norman Ellison, who wrote A Naturalist’s Notebook in the magazine and was clearly a huge fan of Hilbre.  One of his pieces from Cheshire Life in April 1970 is an interesting article entitled “Storm over Hilbre” with an excellent and rather emotive image included.  Another book that interested me when I found it is Atgofion Ynyswr (roughly “Memoirs of an Islander”) by Lewis Jones, Hilbre gynt (formerly of Hilbre) published in Liverpool in Welsh, although there are some specific related pieces included in English (ref: 228560).  Mr Jones was the Telegraph Station Keeper on Hilbre (at the location on the map above) from 1888 until his retirement (back to Wales hence, I’m guessing, the language of the book) in 1923.  The book looks absolutely fascinating, but is rather lost on me due to its language of publication.  Thankfully I can see online that a Hugh Begley undertook a translation in 2003, although this has not, unfortunately, been published.  It is, however, available to consult at West Kirby Library. 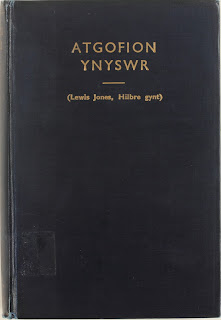 Things then took a slightly unexpected turn when I found a fantastic book called Hilbre, The Cheshire Island: its history and natural history (ref: 016561) published in 1982.  This lovely 306pp volume is notable for a number of reasons.  Firstly, its cover and several internal illustrations were undertaken by a Guernsey born prize winning artist, Laurel Tucker who won many prizes and huge acclaim for her work, particularly with regard to her bird illustrations.  Very sadly she died in 1986, aged only 35. 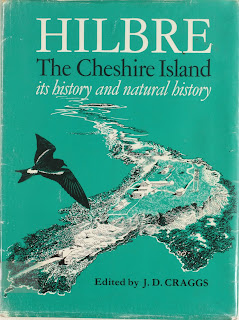 In the same book, I then spotted a 17 page chapter entitled “A year on hilbre” which is written by an Ann Cleeves about her and her husband Tim’s first year on Hilbre (1977-78) where he was employed as the resident Warden.  In the list of Contributors printed on the dust jacket it states: “A. CLEEVES, wife of the Warden lived on Hilbre from 1977 to 1981, and holds a Certificate of Qualification in Social Work, University of Liverpool.”  This raised my eyebrows a little, and some judicious googling later revealed that this was indeed the well-known crime writer, best known for her Vera Stanhope and Shetland Island series of titles.  In several interviews Ann has alluded to this period, and indeed on her own biography she writes “Soon after they married, Tim was appointed as warden of Hilbre, a tiny tidal island nature reserve in the Dee Estuary. They were the only residents, there was no mains electricity or water and access to the mainland was at low tide across the shore. If a person's not heavily into birds - and Ann isn't - there's not much to do on Hilbre and that was when she started writing.”  However, to the best of my knowledge, Ann has not actively publicised this early work before.  As this actually appears to be her very first published work, it remains to be seen whether this now leads to a rush of collectors suddenly vying for what must be a somewhat limited number of copies.  Time will tell!

As always there appears to be something for everyone here at Cheshire Archives – from seventeenth century Indentures to the first tentative steps towards literary stardom.  All that is left (apart from the other 150-odd related items on the catalogue) is to actually visit the Islands themselves, something that a combination of the tide and the weather forecast has so far combined to stop me undertaking .  I shall have to remedy that.  Which brings me to my final, and very important, point to note if you are going to visit Hilbre – you really do need to plan your visit very carefully around the tide timetables.  An excellent guide with very precise instructions on when you can and cannot go, and on what route to take across the sands, can be found here http://www.deeestuary.co.uk/hilbre/plan.htm. The tide timetables themselves can be found in many places including on the BBC website http://www.bbc.co.uk/weather/coast_and_sea/tide_tables/5/461#tide-details


(Addendum:  Since I wrote this, I’ve been doing some work on the population of Hilbre at census time which shows some fascinating glimpses into the history of the island in the second half of the nineteenth and first years of the twentieth centuries.  At times, it was home to a surprising number of people.  You’ll have to await a future blog to read about this in full.)
Posted by CheshireRO at 14:44 No comments: