When one thinks of dialects and accents in the North-West of England, Cheshire isn’t necessarily the first place that springs to mind.  We’re surrounded by the strong voices of North-East Wales, of Lancashire, Derbyshire, Staffordshire, Shropshire, the Wirral and Liverpool.  Throw in socio-economic factors (the relative ‘wealth’ of the county in comparison with some of its neighbours) and the transitory nature of large sections of the population today, and it’s perhaps unsurprising that Cheshire sometimes feels a little devoid of a language specifically of its own in the 21st Century.

I first encountered discussion of Cheshire dialects in A W Boyd’s wonderful study of Great Budworth, A Country Parish, originally published by Collins as part of their New Naturalist series in 1951 (Local Studies Ref 010407).  Boyd illustrates one of the problems with describing a specifically Cheshire dialect – its extreme geographical variability.  He points out for instance that “there is a change of certain vowel sounds between Stretton and Whitley, not three miles apart…”.  However he does explain the similarities as well.  In another example he writes that “One of the most characteristic pronunciations is that of the ‘ay’ sound as in ‘paid’, which becomes ‘ee’; thus paid, tail, bacon become peed, teel, beecon.”  Boyd concludes his chapter on dialect with a lengthy paragraph including several dialect words which were still in use in the area around Great Budworth when he was writing the book.  A section of that is included here:


"Owd Bob wor getting’ on and mun ha’ been welly eighty year owd, but he wor always agate on th’ farm.  The weather wor gleamy, close and puthery, and after mizzlin’ a but it had turned into a reet drabbly day and Bob wor weary, for th’ mare had turned gafty and had wauted th’ cart o’er and broken th’ ridg’uth*"


The 19th century was certainly the high point in terms of publishing collections of county dialect.  Roger Wilbraham originally produced “An attempt at a Glossary of Some Words Used in Cheshire” in Archaeologia Vol XIX in 1817 and this was then produced in book form nine years later (Ref 011901).  This is a slim but useful volume, and forms the basis of several of the latter collections.  There are several entertaining asides included.  I particularly enjoyed this:

Jack Nicker, s. a goldfinch: why so called I cannot conjecture.  It is particular, however, to observe the appropriation of Christian names to many kinds of birds.  Thus all little birds are by children called Dicky birds.  We have Jack Snipe, Jack Daw, Tom Tit, Robin Redbreast, Poll Parrit, a Gill-hooter; a Magpie is always called Madge, a Starling Jacob, a Sparrow Philip, and a Raven Ralph.

Several authors attempt to build on Wilbraham’s work.  Lieut.-Col Egerton Leigh, M.P. had his work “A Glossary of Words Used in the Dialect of Cheshire” published the year after his own death in 1876 (Ref 011902).  This is a far more substantial work than Wilbraham’s, and one in which the Conservative politician clearly isn’t afraid to make the odd appearance at times:


"Tic, s. – The Cheshire word for the foot and mouth disease in cattle, from which this county, as well as others, has suffered so grievously since the introduction of foreign cattle; from the wilful carelessness of the men then in power, in not enforcing proper preventative measures."

The most substantial work of the lot is “A Glossary of Words used in the County of Chester” (the breadth of imagination used in imagining titles for these works was, it could be argued, somewhat limited) by Robert Holland published in 1885 (Ref 011903).  This is a hefty tome - well over five hundred pages - and also features an entertaining dialect story (“Betty Bresskittle’s Pattens, or Sanshum Fair, A Cheshire-Mon’s Crack” by J.C. Clough) including sections such as this:

“Nah, Betty Bresskittle, his weife, were awful bad wi’ th’ rhoomatic I’ th’ smaw o’ her back, an hoo sot theer i’ the’ cheer, chunneringk an as fow i’ her temper as yoh ne’er heeard tell on i’ ony Christen wimmen folks, aw’st be bahnd!”


The William Andrews  edited “Bygone Cheshire” from 1895 (Ref 011153) is an excellent collection of chapters of different subjects concerning the county.  One of these, by J. Potter Briscoe is a fascinating collection of Cheshire Proverbial Phrases including: To females who “are ashamed to speak their own country dialect” after intercourse with Londoners, probably as “domestics” this common saying is applied by Cheshire folk :- “She hath been at London to call a strea a straw, and a waw a wall.” 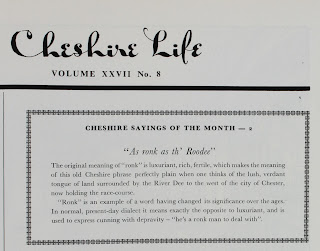 We have also catalogued several newspaper and magazine pieces (like this photograph of a small piece in Cheshire Life from August 1961) along with many other journal articles, and further books.  If this little introduction has whetted your appetite at all then our online catalogue opens up these and many more avenues of investigation.  Good luck!