In 1819 less than 2% of the population had the vote and there had been some agitation by the Radical Reform movement for democratic change. Magistrates feared civil disturbances and were reliant on the volunteer cavalry- the Yeomanry, to help keep the peace.On the 16th August 1819, 60,000 people gathered at St Peter’s field, Manchester to listen to radical orator Henry Hunt speak on electoral reform. At half past one, the Yeomanry were sent in to charge and disperse the crowds. An estimated 18 people were killed and over 700 injured. The massacre became known as Peterloo.

The Cheshire Yeomanry were in attendance at Manchester. Sir John Fleming Leicester was the first commander of the Cheshire Yeomanry and in our collection of the papers of the Leicester Warren family of Tabley there are many first-hand accounts of events of the day and in the build-up and aftermath. To mark the 200th anniversary of Peterloo we will be sharing transcripts of these letters on our blog.

This final letter is from John Hollins to Sir J F Leicester Bart, Colonel of the Cheshire Regiment of Yeomanry Cavalry. It refers to Henry Hunt (the key speaker on the day of the Peterloo Massacre,) Sir John Byng (the General Officer Commanding the Northern District of the British Army), Lieutenant-Colonel Townsend of the Cheshire Yeomanry, and home secretary Lord Viscount Sidmouth. 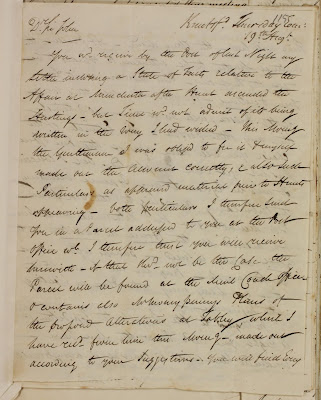 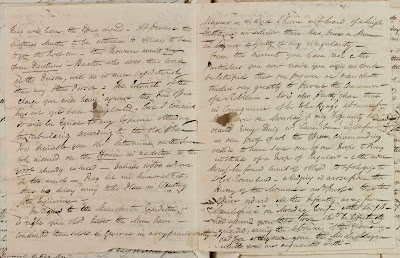 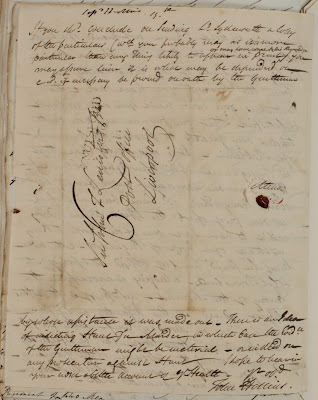 Knutsfd  Thursday Even.
19th August
Dr Sir John,
You wd  receive by the Post of last night my Letter incloseing a State of Facts relative to the Affair at Manchester after Hunt ascended the Hustings – but time wd not admit of its being written in the way I had wished – this morning the Gentleman I was obliged to for it himself made out the account correctly and also such particulars as appeared material prior to Hunts appearing – both particulars I therefore send you in a Parcel addressed to you at the Post Office wh I therefore trust you will receive herewith – if that shod  not be the case the Parcel will be found at the Mail Coach office & contains also Mr Moneypenny’s Plans…

(a long paragraph on proposed alterations to Tabley follows, which I omit)

In regard to the Manchester Expedition it is right you shoud  know the men have conducted themselves in general in a very praiseworthy manner – indeed I have not heard of a single instance in which there has been a Man in Liquor or guilty of any irregularity – From the accounts you have recd  & the particulars you now receive you will no doubt be satisfied that our presence at Manchester tended very greatly to prevent the Commencement of a Rebellion – It is also pretty clear that in Consequence of Sir John Byng’s absence frm  Manchester (hole in page) on Monday if any difficulty had occcured Every Thing wd have been in confusion as one proof of wch  the officer commanding wish’d to have sent one of our Troops to Bury instead of a Troop of Regulars - & the word hereof he found himself obliged to apologise to Lt Col Townshend – alledging it arose from the Hurry of the moment – and proofes that this officer ordered all the Infantry away from Macclesfield on Monday Eveng – altho Sir JB had assured you that Town shd  be effectively guarded, during the absence of the Yeomanry & as soon as they were gone then mischief began which you are acquainted with.

If you should conclude on sending Ld Sydmouth a copy of the particulars (wch you probably may as it is more particular than any thing likely to appear in print or may have come to his Knowledge you may assure him it is what may be depended on & wd if necessary be proved on oath by the Gentleman by whose assistance it was made out – There is an idea of indicting Hunt for Murder in which Case the condn of the Gentleman might be material – or indeed in any prosecution against Hunt.    I hope to hear in your next a better account of yr Health   Yr obdd