In 1819 less than 2% of the population had the vote and there had been some agitation by the Radical Reform movement for democratic change. Magistrates feared civil disturbances and were reliant on the volunteer cavalry- the Yeomanry, to help keep the peace.On the 16th August 1819, 60,000 people gathered at St Peter’s field, Manchester to listen to radical orator Henry Hunt speak on electoral reform. At half past one, the Yeomanry were sent in to charge and disperse the crowds. An estimated 18 people were killed and over 700 injured. The massacre became known as Peterloo.

The Cheshire Yeomanry were in attendance at Manchester. Sir John Fleming Leicester was the first commander of the Cheshire Yeomanry and in our collection of the papers of the Leicester Warren family of Tabley there are many first-hand accounts of events of the day and in the build-up and aftermath. To mark the 200th anniversary of Peterloo we will be sharing transcripts of these letters on our blog.

The following letter is from the Earl of Stamford and Warrington, George Harry Grey to Sir J F Leicester Bart, Colonel of the Cheshire Regiment of Yeomanry Cavalry. The note at the bottom of the page is from Major Trafford, commander of the Manchester and Salford Yeomanry. 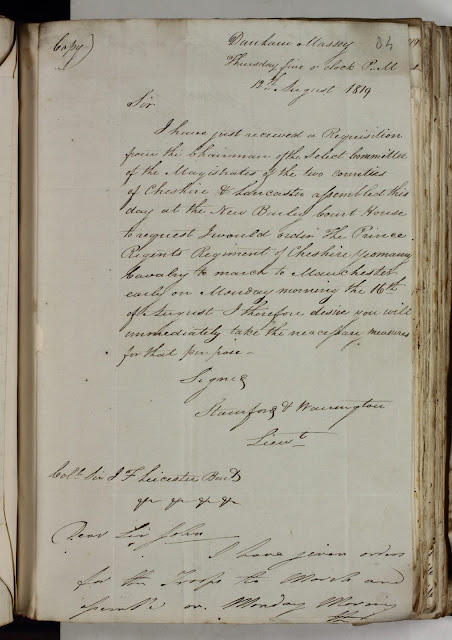 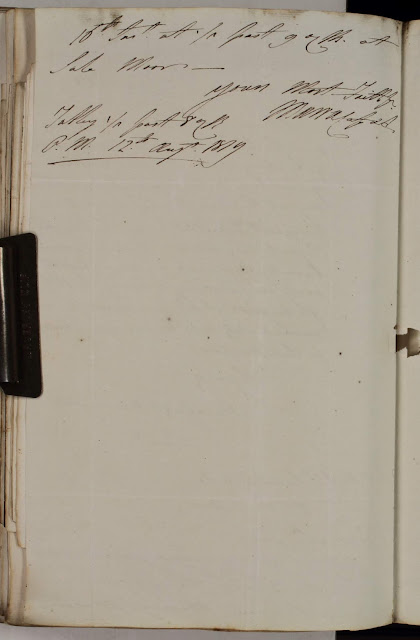 I have just received a Requisition from the Chairman of the Select Committee of the Magistrates of the two counties of Cheshire & Lancaster assembled this day at the New Bailey Court House to request I would order The Prince Regent’s Regiment of Cheshire Yeomanry Cavalry to march to Manchester early on Monday morning the 16th of August. I therefore desire you will immediately take the neacessary measures for that purpose