The Month of May 1919 in the Sailors and Soldiers Rest

The signing of the Armistice in November 1918 ended the major part of the hostilities of the First World War. However, it took many more months to organise the return of the vast numbers of men scattered across the globe.

One of our previous blog posts, “Crewe Station - the Heart of Britain’s Railways in World War I”, focuses on the Sailors and Soldiers Rest at Crewe Station and the two Rest visitors’ books held at Cheshire Archives.

These books give a fascinating glimpse into the experiences of the men that stayed at the Rest. Many called in at the Rest for a cup of tea, a meal, or a bed for the night, while others killed time between trains.

Their comments often included grateful remarks about the hospitality, their relief at being demobilized, or regret at having more time to serve after a spell of leave.

A copy of a local news magazine published in March 1916 by Eardleys, the major printing company in Crewe, is pasted into one of the visitor books and states:

“The crude verses the men have written, the sometimes misapplied quotations, and the slang methods of expression, form an interesting study and throw a curious light upon the varied personality of the visitors.”

Battles were said to be fought over again, trench incidents recounted, and, according to Eardley, “…one has an excellent opportunity of studying the tranquil humanity which makes Tommy and Jack conspicuous among the fighting units of the world”.

In the month of May 1919 over 2,000 men passing through Crewe signed the book, well illustrating the world-wide nature of the Great War. Destinations included Cape Town, New York, Miami, Victoria BC, Adelaide, Nicaragua, Johannesburg, Moose Jaw Saskatchewan, and Arkinsaw, and of course many places in Britain including Chester.

Journeys had started in Germany, Italy, Palestine, France, Bulgaria, Malta, naval bases from Scapa Flow to Plymouth, and  RAF airfields including Shotwick, (a few miles from Chester), and RAF Shawbury in Shropshire.  Many were travelling to and from Prees Heath, a massive army camp near Whitchurch.

A number of the troops, including many from the Royal Field Artillery, were heading for North Russia, via Crewe, as part of the Russian Relief Force. This was partly to keep the Bolsheviks back whilst the allies were evacuated and also for other plans that Winston Churchill was said to have devised.

Some other messages from the troops included:

"Is the bacon still rationed? Once more unto the breach”

“Always open when others are closed”

"Waiting for an airship”

“Puggled to the wide” (said more than once!)

“I wish the pubs were open, I am dry”

“Here all night without a pint” (the Rest was established by the Church of England Mens Society in a Temperance Union mission room...)

And from a member of the Field Survey Battalion, Royal Engineers:

It is interesting to attempt to trace the details of some of the men who stayed at the Rest using online resources. For instance, Acting Lance Corporal Walter Shard, formerly a joiner of Towers Cottages, Poynton, joined up in September 1914.

He was a hospital orderly in the Royal Army Medical Corps for 3 ½ years and in August 1918 he contracted Trench Fever, resulting in pains around his heart and shortness of breath.

He left the following heartfelt phrase in the Visitors' Book:

This blog was written and researched by one of our volunteers, Susan Chambers. Susan will be blogging more about the Sailors and Soldiers Rest in the coming months - check back soon to hear more stories from Crewe!

Many of us will enjoy a bank holiday next week, but did you know that May Day celebrations have taken place for centuries?  The earliest, known as Floralia, dates back to Roman times - a festival of Flora, the Roman goddess of flowers.  Festivities were banned in the UK during Puritan times, but traditions such as maypole dancing, crowning the May Queen and Morris dancing continue to the present day.  Cheshire Archives and Local Studies are fortunate to have some images and documents that show some of the many traditions and celebrations of this festival.

A key May Day Festival in the Cheshire calendar takes place in Knutsford.  It was first held in 1864, and is known as Knutsford Royal May Day Festival after a visit in 1887 by the then Prince and Princess of Wales (later King Edward VII and Queen Alexandra), who gave the organising committee permission to use the prefix ‘Royal’ from then on.  As well as the crowning of the May Queen, Knutsford has a unique custom of ‘sanding’, where coloured sand is laid in mottoes and patterns on the streets.  According to the Official Programme we have from 1955, the origin of sanding comes from King Canute (who reigned from 1016 to 1035).  He is said to have,

"forded a brook near Knutsford and sat down to shake the sand out of his shoes.  While he was doing this a bridal party passed by – he shook the sand in front of them and wished them joy, and as many children as there were grains of sand.  The Festival Committee were very proud of this local custom and ‘sanding’ is still kept up at the Royal May Day Festival”.

That programme lists all the May Queens and Crown Bearers back to 1864, and a portrait of the 1955 Queen appears on the front cover.

We also hold another May Festival programme dating back even earlier – from Runcorn in 1908.  This includes a detailed account of the procession, the people taking part and the various dances and other entertainment at the event, as well as the charities that stood to benefit from the proceeds. 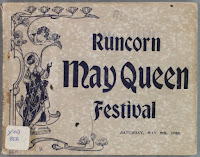 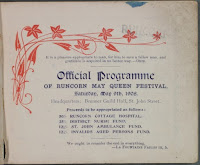 Maypole dancing has been a popular May Day tradition since the Middle Ages, and there are several prints available on the Cheshire Image Bank that show maypoles from across Cheshire West and Cheshire East.

This selection shows a maypole being decorated mid-dance in Winsford at the May Festival at Whitegate in the 1960s; children at Elworth School in Sandbach in the 1920s, and at Vernon School in Poynton between 1910 and 1919.

May Festivals culminate in the crowning of the May Queen.  Here is a selection of May Queens, Attendants and Crown Bearers from across Cheshire from the early 20th Century: at Knutsford between 1910 and 1919, at Chester Roodee Racecourse in 1926 and in Handbridge in the 1930s.

However you might be celebrating, we wish you a happy May Day 2019!