We’ve been browsing the collection at Cheshire Archives and Local Studies for all things tea-related, so pop the kettle on, relax with a brew, as we go on a tour of Cheshire tea-time traditions past and present… 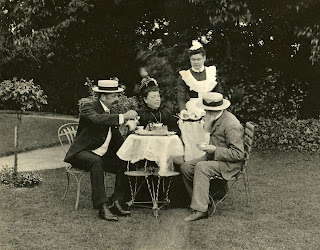 Afternoon tea first became fashionable in the 19th century, when Anna, the seventh Duchess of Bedford, got peckish around 4 o’clock (who doesn’t?!) With dinner not being served till much later, she and her friends began to take cups of tea with bread, butter and cakes to sustain themselves through the afternoon and early evening. It became a fashionable social event, usually served between 4 and 5 o’clock. 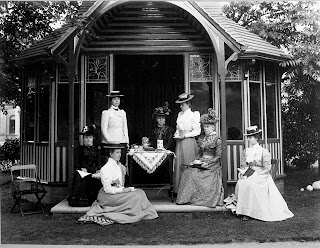 For those of you who favour coffee over tea, coffee houses were popular haunts in the 17th and 18th centuries for men to meet for conversation and business, whilst enjoying the drink newly arrived in Europe. Prior to this, coffee had only been considered as a form of medicine. Tea, hot chocolate, and light meals were also served in coffee houses. One such coffee house in Cheshire was King’s Coffee House, located on King’s Street, Knutsford. Opened in 1907, the building housed council offices, a coffee house and a memorial to novelist Elizabeth Gaskell. 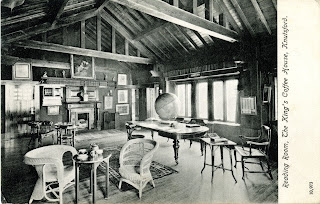 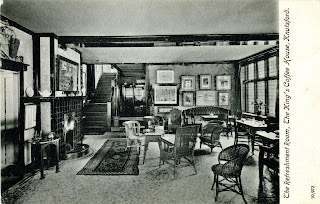 What about a slice of cake or biscuit to go with your brew? You need look no further than Mrs Elizabeth Raffald (1733 – 1781), housekeeper at Arley Hall in the 18th century. She then went on to become a successful writer after her cookery book “The Experienced English Housekeeper” was published in 1769. Containing 800 recipes and pieces of advice for ladies, housekeepers and cooks, the book was so popular there were around 20 editions printed in her lifetime. Did you know that the origins of the modern wedding cake can be traced back to her? Why not try out her recipe for macaroons?! 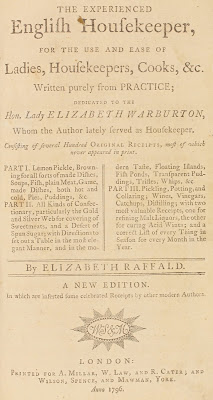 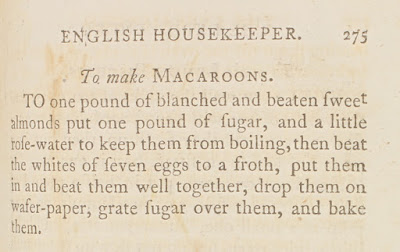 Several of the recipes to be found in “The Experienced English Housekeeper” are for traditional cakes and tasty treats associated with Cheshire. They include:

Where could you buy your cake ingredients from, as well as tea and confectionary, in the 19th and early 20th centuries? Bollands in Chester was established in 1846, as a fine tea and coffee merchant, located on Eastgate Row. You could also give your patronage to Dutton’s in Chester, which served “dainty afternoon teas”. 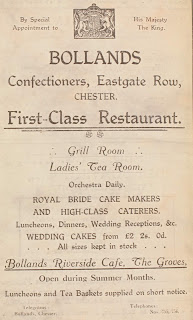 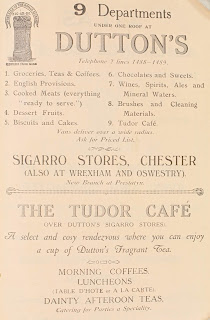 So whatever your beverage of choice, and wherever you choose to enjoy it, we hope you have enjoyed this “dainty” look at the afternoon tea tradition in Cheshire!
Posted by CheshireRO at 11:33 No comments: