The Dew Family of Chester

Whilst checking a baptism entry in the Chester St Mary parish register, an unusual name stood out from all others on the page. ‘Evening Dew’ was baptised on 24th February 1884 to parents Henry and Ellen Dew of 36 Pyecroft Street in Chester. Such an unusual name prompted the question...’what if they have a family member called Morning Dew?’ This was too interesting to ignore! So follows the story of the Dew family of Chester...

Henry, a stone mason by trade, and Rose Ellen King were married in Clerkenwell, Middlesex in 1868. They went on to have six children, five of which survived into adulthood. The first child to be born was named Rosina Dew in 1869, born in Farnham, Essex, followed by Henry Dew born in Lymm, Warrington in 1873. These two children were baptised in Chester St Mary in 1874, prompting the conclusion that Henry senior and Rose Ellen moved from Clerkenwell to Lymm and then Chester, all within in the years 1868 and 1874.


Along with Rosina and Henry junior, their younger brother ‘Morning Dew’ was baptised in Chester St Mary on 25th May 1874. We did a few double takes, but the name is definitely right and the question which prompted this search was answered. Evening Dew did indeed have a sibling called Morning Dew! 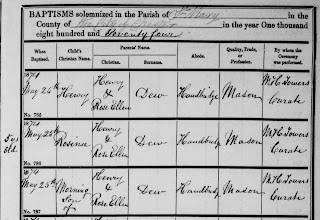 This was not the end of the discovery of unique names in the Dew family legacy. Henry and Rose Ellen went on to have another daughter, Rose Ellen King Dew baptised at Chester St Mary in 1879. This was however, after the birth of the couple’s third son, Mynott King Hercules Dew! Mynott was baptised in Chester St Mary on 5th June 1876.

All of the Dew children bar one went on to marry in Chester. Unfortunately Evening Dew died aged 8 months in 1884. Even more unfortunate was the discovery of the death of Henry senior in 1883 aged just 39 years. Both father and child are buried together in Overleigh cemetery, although the evidence suggests that neither met in life and were only united after their deaths. Rose Ellen Dew (nee King) was still alive aged 60 in the 1911 census living with her daughter Rose Ellen King Turner and her family. She is listed as a widow, so it appears Rose Ellen never re married after Henry’s death. 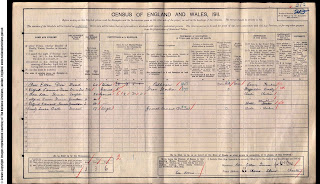 Although an abrupt and sad end to Henry senior and his young child Evening’s lives, he did leave a family whose names definitely do not go unnoticed! I wonder whether they started a family tradition and continued using such curious names?

Posted by CheshireRO at 16:07 No comments: