Herons and Heronries (and a deceased Marten)

As I was walking to work alongside the canal in Chester earlier this year, just about parallel with the Shot Tower, I was surprised to see a Heron staring indifferently at me from the canal edge and this exceptional encounter made me wonder whereabouts it might normally reside? Not being a local, the only Heronry I know personally is the large one at the RSPB reserve Burton Mere on the Wirral, which now seems to house almost as many Little Egrets as it does Herons, a sign perhaps of things to come. 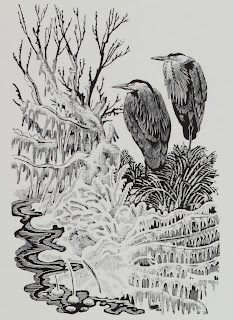 I thought I’d take a look and see what I could find on the birds in the Archives & Local Studies collections.  A look at the catalogue shows only three items catalogued under ‘Heronries’ (there are others, but the problem with searching for ‘Heron’ is that one also brings up all the records for individuals with that surname), but they are very interesting nonetheless.  The oldest, and definitely most fascinating, is a bound copy of a talk given by R. Newstead (the founder of the Grosvenor Museum in Chester) in 1890 and then published three years later in the Proceedings of the Chester Society of Natural Science and Literature.  It is entitled The Heron & Heronries of Cheshire and North Wales (Ref. 200315).  This idiosyncratic little book covers everything from the anatomy of the Heron’s gullet (with illustrations) to tales of Mr Stretch of Ledsham who (we never quite get to understand why, unfortunately) had a pet bird, originally procured from the Hooton Heronry, which was well on its way to swallowing a second ‘Russian Kitten’ before it was stopped.  Sadly this bird had a heavy price to pay as it was eventually killed by two of Mr Stretch’s dogs in the midst of an interrupted rat chase (I’m not making this up).

In another section, Mr Newstead gives us some folk names of the bird including “Varn or more often Yarn” from Cheshire.  Another local, Welsh, name is given by two local (one Cheshire, one Welsh) correspondents – “Crydd Glas, or Grey Shoemaker” as the book states (This is a little odd, as I’m fairly certain ‘Glas’ is actually ‘Blue’ in Welsh?).  The reason given by one correspondent is “that the bird lost its money for a pair of boots in the brook, and has been looking for it ever since”, whilst the other states that this name arises “from the loud smacking noise that these birds make with their beaks at feeding time, which is produced by bringing together the two mandibles with terrific force – similar to that of the owl – and which closely resembles the cobbler at work with his lapstone.”
Towards the end of the book, Mr Newstead produces (from another paper delivered to the same society, this time in 1887) “A Preliminary List of the Mammals of Cheshire and North Wales.”  This includes Otter (“Common on the banks of the Dee.”), Polecat, and even a Marten (described as a ‘British Marten’ or ‘Marten Cat’).  One of these, presented by His Grace The Duke of Westminster in 1891 was shot at Eaton.  Mr Garland (Head Keeper) writes “I send you a Marten Cat which was killed here yesterday morning, coming to the Pheasants’ Field.  It is the first I have seen in Cheshire.”
There are also two rather nice Cheshire Life articles about Heronries, the bound volumes of which are available in the search room.  In the first of these, from 1942 (Ref: 012427) Sydney Moorhouse talks about some of the largest heronries in the County.  His very readable and enjoyable account also includes a description of the sounds that can emanate from the nesting Herons – “I have heard sounds like the mewing of a cat, the bark of a dog, the grunt of an old sow, and the squeal of a young porker all coming from those platforms of twigs in the trees of a heronry”.   In a discussion of the heron’s diet, A. W. Boyd – later author of A Country Parish and, incidentally, subject of an earlier blog – is quoted as reporting the Combermere herons as living mainly on “frogs, coarse fish, and newts” whilst “in the same year a young bird was seen at Eaton Hall with an eel of 21 inches, partly digested, sticking out of its beak.”  No clue is given as to how this measurement was verified. 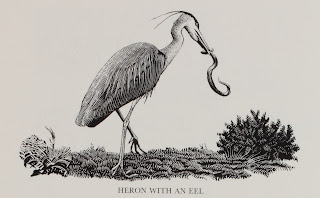 In the other article, from 1957, Norman F. Ellison writes about the Heron in his Naturalist’s Notebook series (Ref: 013710).  This is particularly interesting as it illustrates the enormous cost of the harsh winter of early 1947 to the breed. Two large local Heronries had the number of nests almost exactly halved between the breeding seasons of 1946 and 1947 (Tabley 57 to 29, and Eaton Hall 59 to 27).

If one is wanting more up to date ornithological data, don’t despair…the Local Studies collection holds many local items including local Annual Bird Reports and the excellent Birds in Cheshire and Wirral: A Breeding and Wintering Atlas by David Norman (Ref: 222309) from 2008.  So, the next time you see an unlikely looking creature as you wander around the County, and you fancy finding out a bit more about it, please don’t forget to check us out – you never know what we might hold here in the Record Office.  Which reminds me, I must try and find out why Heron’s Way, in Chester Business Park is so named…


Addendum (May 2017) Just to let you know that the Chester canal Heron is back for the 2017 season.  It was spotted on Saturday evening at about 19:00 just 100m or so down from Waitrose on the other side of the canal, and luckily I had my camera with me.  I have to report that there were definitely ducklings hiding in those reeds - and the heron looked particularly patient. 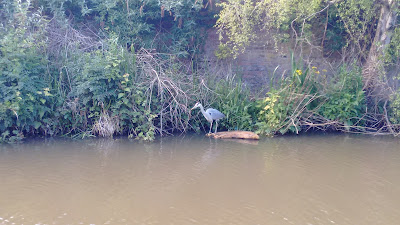 Miranda Lennon is working on a one year traineeship as part of The National Archives Transforming Archives scheme. In this blog she gives an update of her experience so far.

As my third week draws to a close I can reflect that the past five days have been very productive indeed.

I have adopted the role of ‘deeds detective’ by beginning work on my first project, to explore and digitise medieval deeds, including helping to trace a number of deeds back to their original locations. I have been discovering and learning more information about the deeds collection, focusing specifically on a number of deeds concerning the village of Bunbury, Cheshire. I find I am enticed by the mystery and antiquity of the documents and it fascinates me to consider the journey that they have endured over eight centuries, prior to being deposited at Cheshire Archives and Local studies.


The deeds are indeed things of great beauty. They are inscribed with intricate Latin and French calligraphy on delicate parchment, and often have attached a splendid wax seal with a unique imprint. A number of deeds have a wavy or zag-zag indenture edge, which adds to the aesthetic appeal of these historic artifacts.

A lot of my week was spent familiarising myself with the reprographics equipment by photographing, editing and uploading the first selection of deeds. This has helped me to understand some of the practical and technical methods for digitising archival material, as well as giving me more of an insight into the project specifics.  I feel my previous IT and photography skills in Fashion Communication have come in handy during this first digitisation task, and I have so far enjoyed utilizing these skills within a new context.

Another of my tasks was to link the medieval deeds project to ‘Explore Your Archive’, an annual campaign to promote archives across the UK. I have been wracking my brains to come up with an innovative and creative idea to promote the project to a wider audience, and ways in which I can use my creative background in design and fashion to contribute something fresh and different. I had a few inspirational eureka moments and all shall be revealed for the Explore Your Archives campaign launch in late November (I fear I have given myself a lot work to do!), but for the moment it is a secret I intend to keep!

Please follow the links below to enjoy browsing Explore Your Archives and Cheshire Archives and Local Study’s Twitter and website to find out more and to keep updated about the launch week!

Posted by CheshireRO at 16:41 No comments:

Miranda Lennon is working on a one year traineeship as part of The National Archives Transforming Archives scheme. In this blog she gives an update of her experience so far.

I will begin firstly by introducing myself! My name is Miranda Lennon and I am the new Transforming Archives Trainee at Cheshire Archives and Local Studies. I will be taking over from Jessica Minshull’s great work, and I will also be working on some brand new projects during my year’s traineeship. I will be posting regular blog accounts of my exciting experiences and learning throughout the year, which I will upload here on the Cheshire Archives and Local Studies Blog.

I have now completed the first week in my new role, and I have enjoyed my time gaining an overview of the services and meeting the team.  I received a warm welcome from my first project mentor, Archivist Adam Shaw, and at the monthly meeting on Monday morning, where I was introduced to staff working in different roles within Archives and Local Studies.

During the week I was given an overview of the different departments within the building. I met with Local Studies Advisor Linda Clarke, who provided me with a wonderful insight into the service, and showed me some of the fascinating material held within the building, ranging from rare books and pamphlets, to lithograph prints and photographs. She kindly showed me a selection of original early 19th century sketches of people, which I found to be very inspiring! The sketches were beautifully preserved, the colours remained eye-catching, and the line work showed intricacy and technique. I was particularly in awe of the attention to detail showing the figure’s clothing, mannerisms and physiognomy; to me they resembled Dicken’s characters, full of character and idiosyncrasy!

I received handling training from conservator Angela Suegreen, which I found fascinating and enjoyable. She gave a brief overview about the differences between paper and parchment, and about inks. We covered the handling techniques used for different materials including parchment documents, photographs, books and maps. I partook in a couple of handling exercises including manual techniques to retrieve a book from the shelf in order to minimise damage, and  setting up a parchment document using the appropriate weights and rests.

I received Reprographics training from Archive Assistant Joy Laverty, who showed me the equipment and procedures. I had an introduction to photographing, scanning and editing material. I am very much looking forward to learning more about the equipment and about digitisation techniques, as I feel this is incredibly important when considering the future of the archive and heritage sector.

I had an introduction to family history from Research Consultant Brett Langston, who showed me techniques for tracing ancestry using online resources. I had the pleasure of observing Brett research my own family history, which uncovered a few previously unknown details including an elopement at Gretna Green!

I have greatly enjoyed my first week here and I am looking forward to starting work on the first major project involving digitising Medieval deeds, coinciding with the ‘Explore Your Archives’ campaign, which I am due to begin working on during my second week.

Posted by CheshireRO at 08:57 No comments: