'I like this beautiful land better than the old country'

Commonwealth Day 2013 celebrates 'opportunity through enterprise' and we have the evidence of journeys to and from Cheshire that young people have made in search of opportunity. In 2011-2012 we supported the Journeys to Cheshire project but our collections also witness journeys from Cheshire ...


Our Wright family of Bollington collection includes correspondence home to Cheshire as members of the same family set out to build new lives in New Zealand and Canada. The 1871 census records joiner and carpenter Alfred with his wife and young family at home in Bollington. 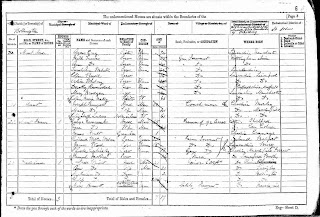 On 30th August 1883 Alfred and two of his sons, Charles and Phillip boarded the ‘Lady Jocelyn’ in Portsmouth. After she was damaged, put back to Portsmouth for repair for two and a half weeks, she faced bouts of atrocious weather until she arrived in New Zealand on 1st January 1884. When 18 year old Charles writes to his Aunt Mary, he comments:

‘... do not expect to hear anything about our passage out, for my hair turns white every time I think of it. I assure you I was as thin as the shadow of a match when I landed instead of being fat’.

In the same letter, we begin to understand more about what has motivated the men to take such risks:

‘... all I can say is that I don’t regret coming in the least, because a working man has a chance here, while in the old country if he must live at all respectable he can’t save much.’

It is Charles who seems particularly taken with New Zealand. In a letter to his sister, Martha Ann, he remarks that he doesn’t want to go home. He tells her that he ‘... likes this beautiful land better then the old country’ and goes on to make a case for Martha Ann to travel to New Zealand and take advantage of the ‘... benefits of this glorious land’.

Alfred writes affectionately to his family back home, with letters dedicated to each family member individually. In a letter written to his sons, John and Samuel, back in England, Alfred describes his journey aboard the Lady Jocelyn. He writes extensively about flying fish, dolphins, porpoises, whales and even sharks - ‘... it bit a thick rope in two as easily as Martha Ann snaps her thread with her teeth’. Compared to his letters to his wife and daughter, the letter to his sons is rather more grisly in its descriptions!

The men also relate their experiences of the native population. In one instance, Charles describes a Maori work colleague as ‘... a full blooded Maori, but so well educated, he speaks the best English I ever heard...’. Alfred describes in detail what he has learned of Maori culture in a letter to his wife Ann.

But later in 1884, in a letter to his sister Mary, Alfred states that although he likes New Zealand very much, he has decided to return home to be with his family. He affectionately refers to his wife as ‘... the best of wives’. It would appear that the distance between the couple proved too much for him to bear. He returned to England with Phillip, but without Charles on 4th January 1885.

In 1886, New Zealand suffered a major volcanic eruption. The eruption of Mount Tarawera was documented by Charles in a letter to his mother and father in July 1886. He describes how the fearful eruptions at Tarawera and the Hot Lake district had resulted in ‘... great loss of life’. He goes on to say that it is believed that the worst is over and he is comparatively safe from harm.

Charles frequently discusses national and cultural events at length, and of course continues to relay personal news to his family back home. One particularly notable event was his marriage to Leah in 1886, where he describes the event as ‘...something now worse than earthquakes, volcanoes and almost everything in the history of New Zealand’! 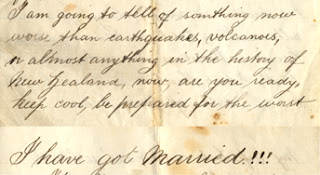 Although later letters home begin to suggest that unemployment was becoming an issue, not only for Charles, but for the country as a whole, and his family ‘back home in the old country’ were sorely missed, Charles Wright appeared to be settled, contented and happy with his decision to stay in New Zealand.
Posted by CheshireRO at 11:00 No comments:

In a week of remarkable revelations about the life and death of Richard III comes evidence from Chester's medieval records of how local government responded to regime change - with understandable caution!

One of our regular researchers using the Sheriffs Pentice Court Rolls was stunned to find a piece of political commentary. The Pentice Court in Chester, named after the building it was held in, dealt largely with cases of debt and trespass and the records of its proceedings are dry and factual. Dates are recorded using regnal years, the format refers to the year of the monarch's reign. But in bringing a case against one man after the Battle of Bosworth in 1485 the clerk needed to refer back to events when Richard III was king. He notes the offence in the year 3 Richard III, and presumably so that there can be no question as to the court's loyalties by the end of August, after 3 Richard III appears a note 'de facto non de iure' - expressing the opinion that Richard had reigned in practice but not in law!

The use of regnal years also appears to have posed similar problems for clerks compiling the Mayor's Books around the time of Henry VII's invasion up to the events at Bosworth Field on 22nd August.

One matter before the Mayor is dated by the feast of St Peter ad Vincula 3 Richard III so, 1st August, 1485. By the time of the Assumption of the Blessed Virgin, the 15th August, the regnal year is ignored completely and the clerk chooses to use roman numerals instead. By the end of August and the 'Beheading of John the Baptist' on the 29th, 1 Henry VII appears along with a numeric 1485 for the last time, and the system reverts to regnal years once more.

Records of a month's routine administration in Chester, the fascinating evidence of people trying to keep pace with fast-moving national events!
Posted by CheshireRO at 15:11 No comments: