As the new school year is about to begin, we have been looking at documents from school days of the past. The records of hundreds of schools are held at Cheshire Record Office in Chester – read on for examples of lessons, rules, uniform, reports and more, going back a hundred and fifty years.

Teaching methods may have changed over time, but pupils have had to learn the same subjects for generations.  Some school exercise books have been deposited with us, such as the French and physics books of a child named Neild at Sandbach School from 1908. Science was perhaps not his best subject, as whole pages of his ‘pysics’ book have been scored through in red ink with the word ‘bad’, presumably written by the teacher who made many other corrections of his work!

The arithmetic book of a girl called Elizabeth Stockton at Harthill County Primary School in 1887 (SL196/7441/8) was much better though - her mathematical problems on silverware weights prompted the teacher to write, “Elizabeth has made a very good beginning, and with care she promises to do well, for she takes great care with her work which is clean and neat throughout."

All schools have rules, and we hold a copy of the ‘Loyal Devoir’ for Mostyn House School in Parkgate, an instructional book written by the head teacher in 1920 listing school rules such as being truthful, having good manners and knowing how to behave in chapel and at a cricket match, for instance.  It also includes an introduction 'To My Boys' reflecting on the effects of World War One on the school and on boys of their class. 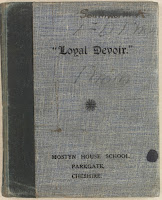 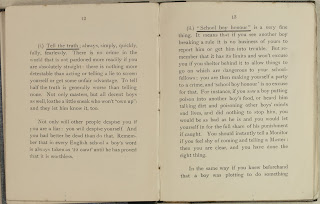 We have several prospectuses of Mostyn House School from the 1880s to the 1930s as well, which included school uniform requirements that were rather different to today: the 1889 version (document reference SP5/8427/18/1) stated,

“boys will need for Sunday wear an ‘Eton’ or ‘Norfolk’ suit, and a silk hat.  For ordinary wear a dark knickerbocker suit and ‘Eton’ collars are recommended”.

When school rules were broken, ‘punishment books’ from dozens of schools across Cheshire detail the corporal punishment children received as a result.  To take one example, Byley Primary School in the 1910s recorded giving one or two 'strokes', presumably with a cane, for carelessness in work or disobedience; two strokes for copying or for refusing to answer; four strokes for not doing work and six strokes were given for telling untruths to a child’s parent (SL 31/2). Other punishment books went into further detail: for instance Acton Church of England Primary had a boy given four light strokes with cane, two on each hand, and detained in school 30 minutes each day for a fortnight, for stealing cardboard coins from school and trying to pass them on to the local shop keeper in 1911, and playing truant resulted in one boy being struck six to eight times across the buttocks in 1919 (SL2/4).

Attitudes to corporal punishment changed over time, as illustrated by a 1968 Department of Education and Science circular found within the records of Macclesfield Parkroyal County Primary School. The Secretary of State acknowledged many teachers’ need for a “reasonable amount of force” in some circumstances, but believed that

“the practice of corporal punishment should disappear from our schools, and I hope that the local education authorities, the governing bodies of schools and the teachers themselves will all use their powers and influence to achieve this end." 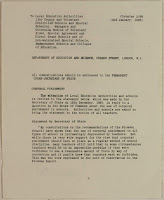 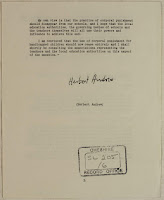 Schools today require high levels of attendance, but everyone has had to spend the occasional day at home due to being ill.  In the records of Alsager County Secondary School, we found guidance of how long sick children should take off school, such as 28 days from the beginning of the “characteristic cough” of whooping cough.  Diphtheria and small pox were also listed as some of the “commoner infectious diseases”, showing how far medical science has advanced today.  We also found an example of Cheshire County Council playing its part in tackling the 1918 flu pandemic in the papers of Acton Church of England School.  A communication from the Education Department’s School Medical Officer shows the whole school being closed for almost a fortnight “to prevent the spread of Influenza”, noting “it will be necessary for you to arrange for the thorough cleaning and aeration of the school for the time it is closed”.

Children also had time off for reasons other than sickness:  the head teacher's log of Saighton Church of England School for July 3 1874 - at harvest time -  "gave several children leave, to help to make hay for their parents" (SL 122).  And it seems many children benefitted from a day off due to the royal family - Acton C E School papers include a note that,

"The Elementary Schools Committee at its meeting on the 20 February, 1922, had before it a request from His Majesty The King that a whole holiday might be granted to all schools on 28 February, 1922, being the wedding day of Princess Mary, and it was decided to accede to this request." (SL 2/5/3)


Attendance nowadays features in school inspections, and we have found evidence of early versions of inspection reports recorded in head teachers' log books.  Congleton Mossley Church of England Primary, for example, received some slightly negative comments regarding its teaching of spelling and geography, but

"the work both on the slates and paper is neatly done and the results in arithmetic are good".

And Saighton School will have been pleased that a summary of the Inspector's Report they received in March 1875 stated that,

"The School is in excellent condition, and the children are thoroughly well taught.  There is no weak point." (SL 122) 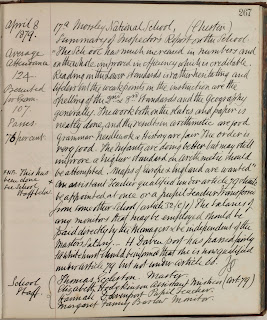 Like today, children of the past occasionally had time away from lessons for school trips or something different like sports day.  We have an account of children at the same school in Saighton who were able to enjoy a sports day, out-of-school visit and treats all at once, according to the school log book entry of August 1 1873, which gave an account of Lord Westminster's annual treat for the children - including a description of the tea ("consisting of a bountiful supply of currant bread, seed-cake etc, which was heartily partaken of by all"), races, games and prize-giving. 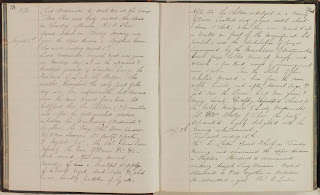 Duddon Church of England Primary School had a dedicated log book for evacuees during the Second World War (SL195/3), which starts in September 1939 and details the numbers of children and how they were separated into classes for their lessons.  Towards Christmas, the log book entry for December 13 describes a teacher who "left school at 11.45am" in order to discuss with the Welfare Worker arrangements for a party for evacuee school children.  We have other school records that show the impact of the war, with evacuees coming to Cheshire from places as near as Liverpool or as far as Guernsey.  This photograph from Bramhall Primary School, which at the time was in the county of Cheshire, shows a knitting lesson for evacuated school girls. 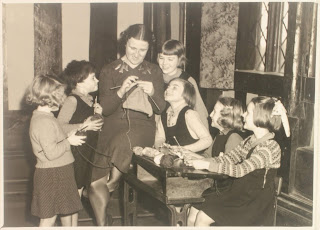 Finally, as the school holidays come to a close, Tattenhall CE Primary School records include an 'Important Notice' from 1875 to the parents and employers of children following an Act of Parliament regarding the employment of children in agricultural labour.  Whilst it states that "no child under 8 years of age shall be employed at all in agricultural work", those aged 8 to 10 could be, if they had attended school 250 times in the 12 months preceding, or 150 times for children aged 10 to 12. 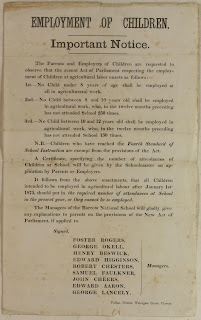 For any children reluctant to return to their studies next week, perhaps they could think about this and imagine how different their lives could be!


All of these documents, and more, can be viewed at Cheshire Record Office in Chester.  Admission Registers for some Cheshire schools have also been digitised, and can be viewed here on Find My Past.

Posted by CheshireRO at 10:14 No comments: