100 years of remembering HMS Chester at the Battle of Jutland

Chester has not forgotten its link with HMS Chester and the men who served on her at the Battle of Jutland on 31 May 1916. If you visit Chester Town Hall this week you will find a small and touching exhibition relating to John Travers Cornwell VC prepared by Chester History and Heritage.

Correspondence between Albert E Horne of Cheltenham, who served on HMS Chester, and the Mayor of Chester indicates that he made regular visits to civic events from the 1950s onwards. In June 1970 he presented the city with a photograph of the 'Boy Cornwell' that is still held in our collections.

In November he writes again to the Mayor enclosing photographs taken at the opening of the 'Victoria Cross' pub on Jack Cornwell Street in his home borough of Newham on 15 September 1970. They appear here with Mr Horne's captions as a tribute to the shipmates and 100 years of remembering. 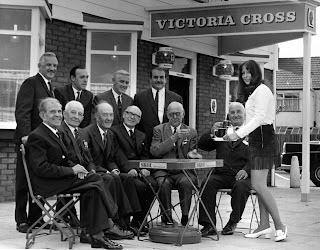 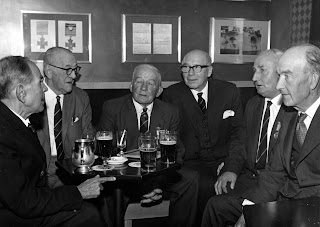 A chat over old times 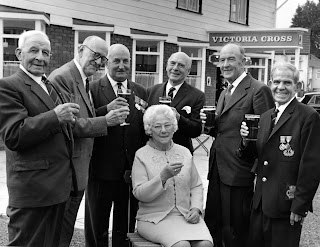 Posted by CheshireRO at 10:52 No comments:

This blog began with a visit to some friends who have recently moved to the delightful (and tiny – literally a handful of houses and a small church) hamlet of Forest Chapel near Macclesfield.  I’ve had family living in Buxton and have previously walked around Wildboarsclough and up Shutlingsloe (arguably more correctly, Shutlingslowe) – ‘the Matterhorn of Cheshire’, but this hamlet was entirely new to me.  It’s an immediately interesting and very picturesque hamlet, and, despite being only 5 minutes away from the main Macclesfield to Buxton ‘Cat and Fiddle’ Road it feels pleasingly away from the hustle and bustle of the modern world.  As I went out for a nice walk in the chilly March sunshine I was also shown the Toot Hill (or Toothill, depending on your source) earthworks up above the hamlet.  I wondered aloud about the naming of this ‘Roman fort’, and indeed what material we might hold with regards to Forest Chapel as a whole?  When I returned to work in the week I endeavoured to have look, and now (a couple of months on) I have finally done just that.
I started by picking up Dodgson’s The Place-Names of Cheshire (published in 5 parts, but actually 7 volumes – and available on the open shelves in the Record Office search room - Ref 500189).  This explains the origin of the ‘Toot Hill’ name:

[Incidentally, and relating to an earlier blog on Cheshire Dialect, locally at the dawn of the 20th Century, corn just shooting above the ground, was said to ‘toot’.]


It is not entirely clear exactly how these earthworks became ‘Roman’.   J.P Earwaker in his Roman Remains in the Eastern Part of Cheshire (Ref 213934) does some careful measurements of the area, and talks about them being a ‘small camp’ and with a slightly raised ridge nearby that ‘may have been a Roman road’ but he provides not the slightest genuine evidence of such a connection.
A more extensive archaeological excavation is undertaken by F.A. Bruton and A.C.B. Brown in 1906 and published in a Classical Association of England and Wales publication Excavations at Toothill and Melandra published in 1909 (Ref 200763).  This contains some interesting plates and very detailed measurings and yet, sadly, “The result of the excavations may be summarised in a few words.  They yielded nothing in the way of finds – as regards traces of human occupation they are negative – and except in so far as a careful examination and measurement of the earthwork may assist, they throw no light on the date of the structure.” 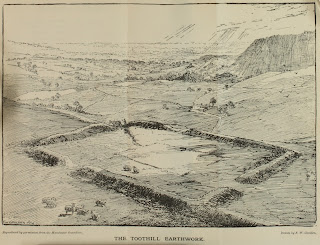 F. Thomas undertook A Fresh Survey of the Earthwork on Toothill in 1960 (Ref 207875) and concludes that “Toothill was never a fort in any period..” and “the site as a whole appeared typical of medieval park and forest sites”.  He also adds, perhaps a little pointedly,  that “Excavation of the ditch and rampart might, with the aid of pollen analysis, possibly combined with radio-carbon dating, give some idea as to date, but unfortunately, the central rectangle was almost completely excavated in 1906, and any evidence, which more scientific methods might have found useful, may have been destroyed.”

In addition to these items, there are some good maps - the early Ordnance Survey 25-inch scale maps (We hold the 1st and 3rd Edition sheets for this area), the Tithe Map from 1849 (Ref EDT 255/2 - also available online) as well as Registers from the church itself (St Stephen, Forest Chapel - Ref P88) which is particularly well known for its annual rushbearing ceremony, and several either items 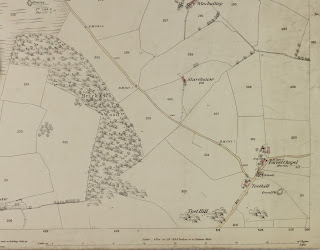 In total, typing ‘Forest Chapel Macclesfield’ into the catalogue produces nearly 50 responses, the majority of them from our excellent local studies collection.
The point, if indeed this blog is trying to make one, however is not meant to be specific, but general.  Literally nowhere is too small (or indeed, too large) to have some records of some description be held by us.  Why not take a look at what we hold on your town, village, hamlet, street, even your house?  You will never know unless you look.
Posted by CheshireRO at 13:49 No comments: