In September 2013, we received a donation of papers found in a chest of drawers bought at an auction. Among them were eight letters. They were sent between June 1886 and May 1887 from Miss Jessie Rowland aged 16 of Grimsditch Hall, Lower Whitley to her 27 year-old cousin, Charlie Rumney. They begin in a friendly way, thanking him for his letter after the death of Jessie’s father, Samuel. But by April 1887, ‘Dear Charlie’ is ‘My dear Charlie’ and by May of 1887, ‘My Dearest Charlie’.
Clearly, Jessie’s affections were reciprocated as in the last of the letters (17 May 1887) she ‘cannot understand you loving such a little insignificant thing like myself … but I can understand anyone loving such a darling as you’ and signing it with ‘Hundreds of kisses’. Though she thinks his letters could be longer! 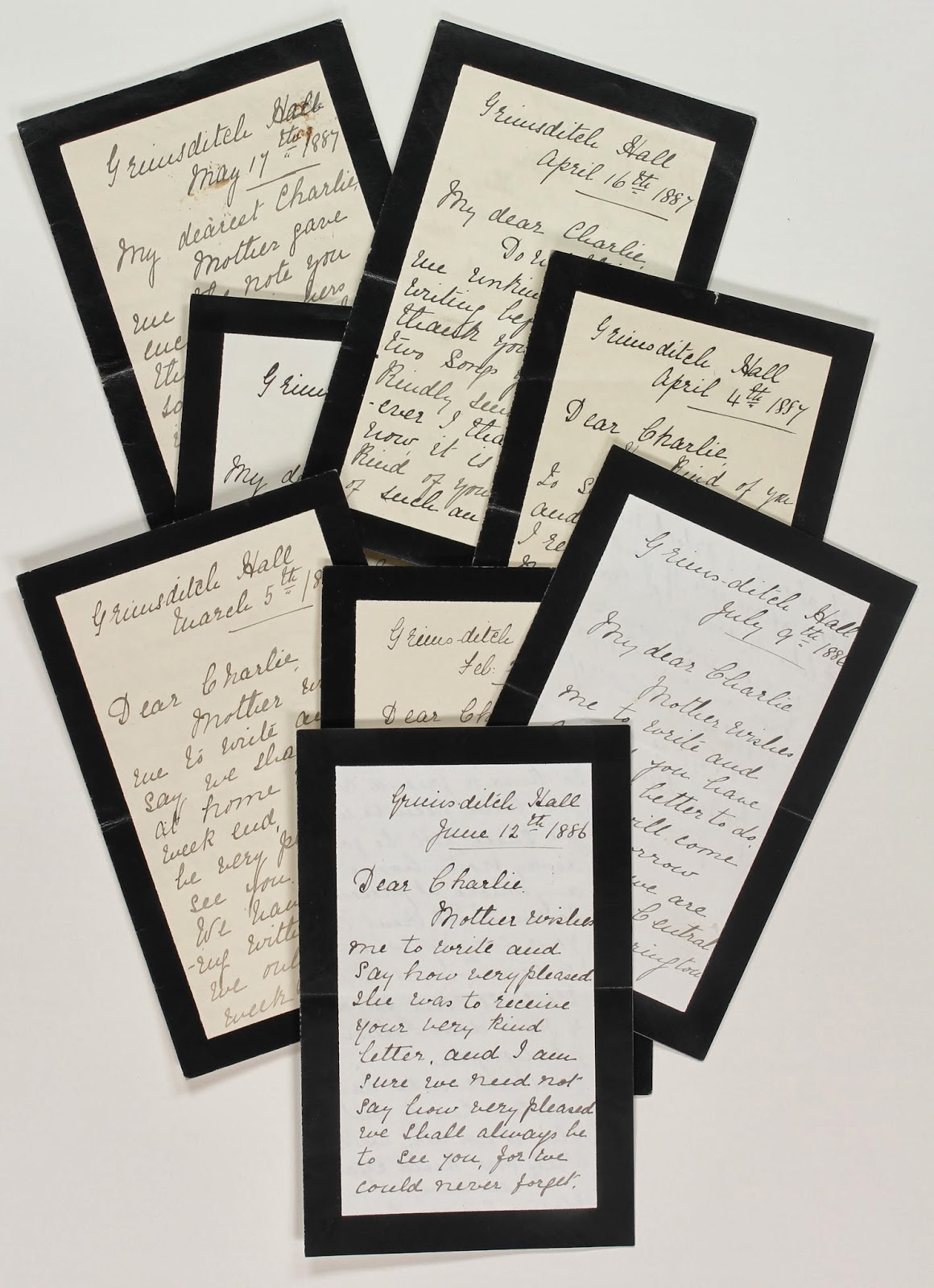 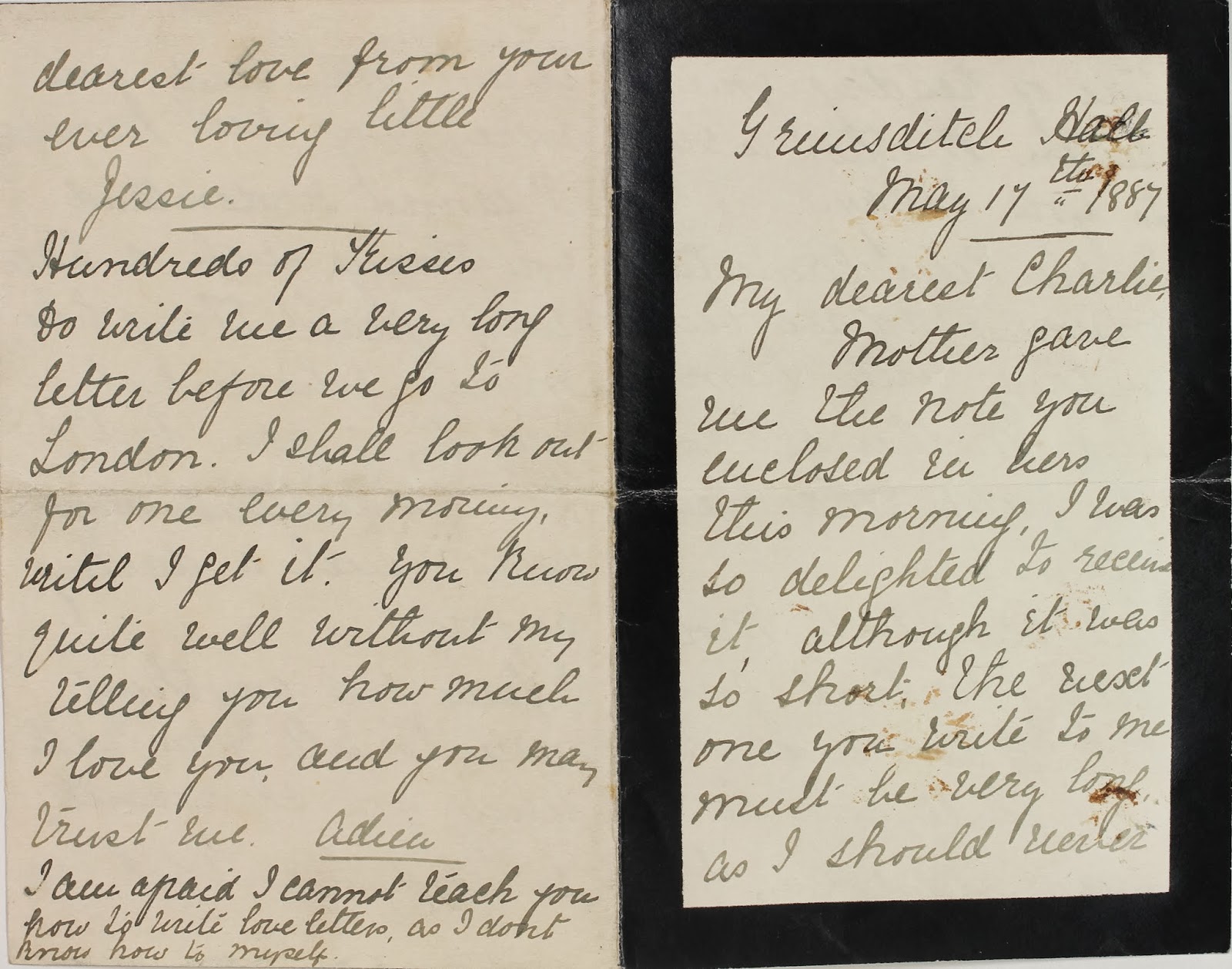 A glance at the census return for 1891 reveals that all ended well and Jessie and Charlie are married and living with her mother at Grimsditch with a one year old daughter, Nora and eight month old Samuel. They had married at Lower Whitley church on 26 July 1888. Jessie and Charles continued to live at Grimsditch Hall until their deaths and the Hall remained in the family until the death of their third child, Kathleen Joyce Rumney who died there in 2004.

Our reference for the collection is D 8474.
Posted by CheshireRO at 11:23 No comments:

Explore Your Archive - our box and its travels!

We first made our box available at our regular Saturday opening on 16th November. A sample of the contents were also made available online. There is often excitement as researchers handle and investigate original historic documents – but this was a different kind of enthusiasm as visitors could pick what caught there eye, quickly switch between documents, pass documents to other visitors and not have to know what to request.

We had discovered early on a wonderful coincidence. The Haygarth Lecture, an annual Public Health event at the University of Chester, was taking place on the Monday evening of campaign week. How could we not make a special appearance, this time with an original patient register on display to welcome the 100 or so delegates? Ben Page CEO of Ipsos MORI spoke of the power of public opinion and data in influencing health behaviour change. Caryn Cox, Director of Public Health for Cheshire West and Chester Council introduced him, remarking on her experience of archives, that you cannot move forward without understanding the past.

Tuesday found us in Ellesmere Port Civic Centre at a ‘Self Care Day’ organised by West Cheshire Clinical Commissioning Group with Chester Voluntary Action who told us about their upcoming centenary. We arranged a meeting about using the collection we hold to celebrate their long history of community support. We met the Snow Angels and rifling through the medicine chest gave them the idea of using replica documents to help their volunteers engage vulnerable older people with modern health messages. The same day a box was delivered to the Countess of Chester Hospital where it was left to its own devices for a week, moving between the staff canteen and the main foyer.

An archivist was on duty in Warrington Library on the Thursday, and box came too. With the help of the local studies staff, the archivist the week before had set up an exhibition of material we had selected from Warrington’s collections – including public health notices and records of payments in rum to William Boon to transport typhus fever patients and whitewash infectious dwellings!

Friday and back to the Countess for a lunchtime session at the Oasis Café. Archives with food and drink! Not to mention a kind and interested audience from contractors to canteen staff, clinicians and their patients to a Chief Executive!

Friday evening, and one last drop off at Halton Lea Library – from where the box would journey to Widnes and back over the following week.

Its travels did not end with the November campaign. Still in demand it has recently been visiting the Riverside Museum. It is hard to tell how many people have taken a look inside, but we have had to fit one set of replacement doors, which has to be a good sign!

Our thanks to staff at Warrington Livewire and Halton libraries, the Countess of Chester Hospital, Cheshire and Wirral Partnership NHS Foundation Trust and the University of Chester.

And for our talented, resourceful and creative staff, we are the Archives and Local Studies service, so the only appropriate thanks was cake. 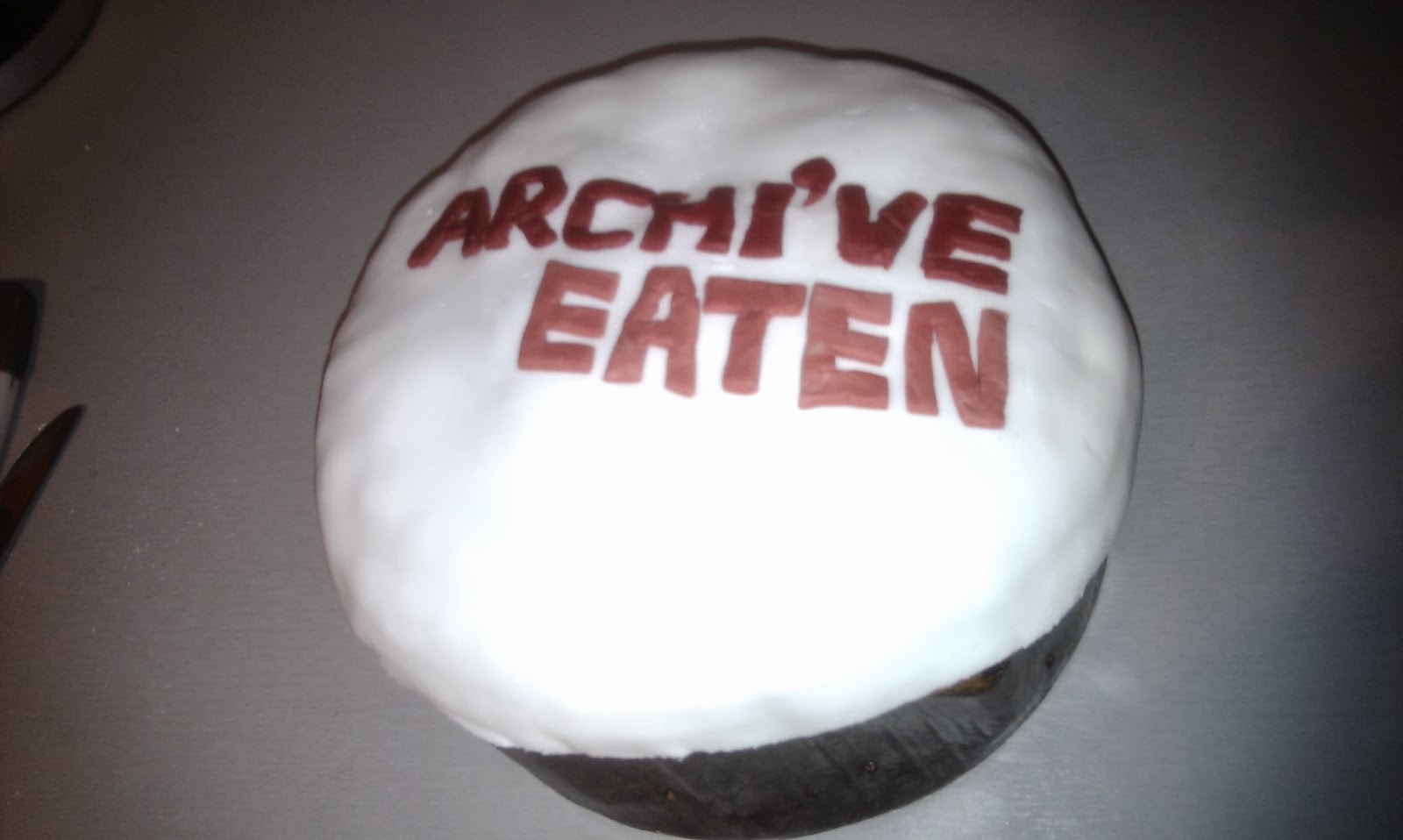 Posted by CheshireRO at 09:59 No comments: