Earlier this year at Cheshire Archives and Local Studies we examined some images of Queen Victoria's Golden Jubilee celebrations in Macclesfield, in 1887. These images are now available on the Cheshire Image Bank and can be viewed here. Amy, one of our work placement students, enthusiastically researched the images and put together this blog post to tell us more...

Queen Victoria's Golden Jubilee was celebrated on June 20th and 21st, 1887. For the Queen herself, the celebrations included a royal banquet and, escorted by the Indian Cavalry, a celebratory procession in London, before returning to Buckingham Palace for a final appearance on the balcony, receiving huge cheers from the crowds below.

In Macclesfield, Sunday School children gathered on Park Green and sang the National Anthem in celebration. Photographs from the day show crowds of people assembled in a procession, arriving at Park Green. The photographs show mill buildings such as Frost Mill, which was destroyed in a fire in 2011, and the Methodist Free Church, also known as Chapel Mill, which became the head office of Gradus Ltd. 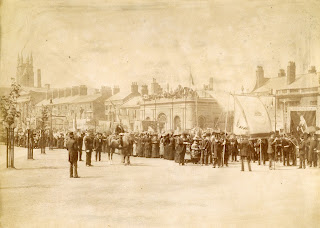 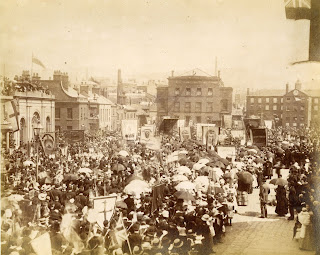 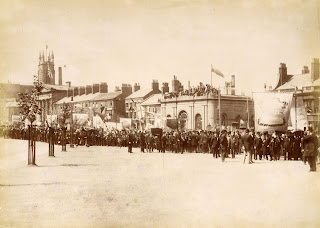 Banners were held by those taking part in the procession, including one which can be seen depicting Queen Victoria. Crowds also gathered in windows and on rooftops to watch; clearly health and safety laws were less stringent in those days! 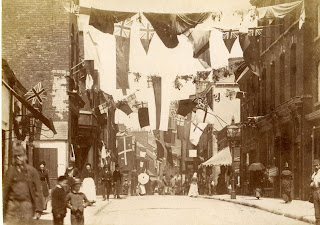 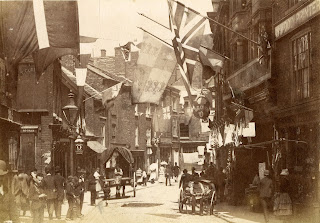 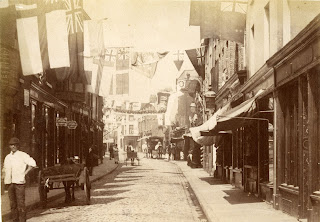 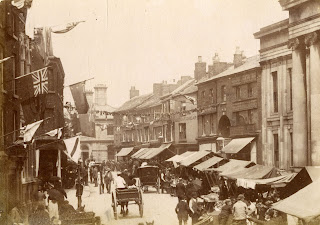 Mill Street, Chestergate and Market Place were decorated with flags and bunting. Local businesses such as P & Wood Printers can be seen on Mill Street. The public house known as the Wheatsheaf can be seen in Market Place, as well as Macclesfield Town Hall. Instead of cars, horse-drawn carts can be seen in these photographs. Queen Victoria herself rode in her gilded state landau drawn by six cream-coloured horses during her jubilee celebrations, as part of the procession through London. 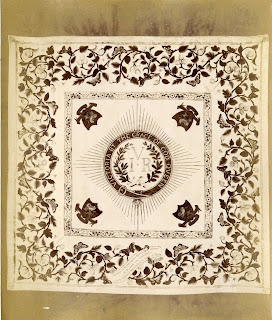 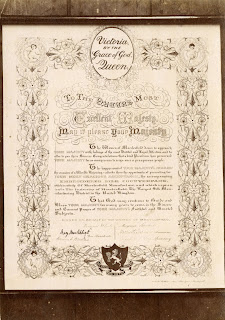 
Victoria, by the Grace of God, Queen. To the Queen's most excellent Majesty, may it please your Majesty. The Women of Macclesfield desire to approach your Majesty with feelings of most Dutiful and Loyal Affection, and to offer you their Sincere Congratulations that a kind Providence has preserved your Majesty for so many years to reign over a prosperous people. The happy event of your Majesty's jubilee - the occasion of a World's Rejoicing - affords them the opportunity of presenting for your most gracious acceptance, the accompanying embroidered silk counterpane, which is entirely of Macclesfield Manufacture, and which represents the Industry of Macclesfield, The Largest Silk Manufacturing District in the United Kingdom. That God may continue to guide and bless your Majesty for many years to come, is the Sincere and Earnest prayer of your Majesty's faithful and devoted subjects. Signed on behalf of the Women of Macclesfield. 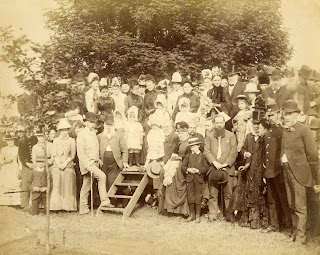 On June 22nd, 1887, Macclesfield residents gathered in West Park to plant an oak sapling to celebrate the Queen's Golden Jubilee. Men, women and children can be seen gathered on, in front of, and even under a platform in the park to be part of a photograph of the event. West Park was originally known as Macclesfield Public Park, and was opened in 1854 to give working people access to the countryside after the closure of the commons in 1804. Within three weeks of Councillor John May's proposal that a public park be opened in Macclesfield, £300 had been collected in small amounts from 17,000 working people in the town, which became known as "The Pennies of the Poor". This was one of the most successful fundraisers in the town at that time, showing the strong public desire to have access to a space for leisure and to be around nature.
Posted by CheshireRO at 09:54 No comments:

With the Record Office currently closed to the public, the staff have been finding ways of bring our collections to you.

One of these ways is Flickr. This website allows us to create albums of photographs and images of  documents for you to view and enjoy. One of our recent additions is an album relating to the old Chester leadworks. You can see the album here.

The site of the Chester leadworks in Boughton is currently being redeveloped, but the Shot Tower, a familiar sight on Chester's skyline, is still at the centre of the site.

Shot towers were first designed in 1782 for the production of lead pellets. Molten lead was poured through a copper sieve at the top of the tower, and then fell through the tower before being cooled in a basin of water at the bottom.

The Chester Shot Tower is believed to be the oldest of three still in existence in the UK, and was classed as a Grade II listed building by Historic England in 1981.

The original leadworks site was developed by Samuel Walker in 1799 and was named Walkers, Parker & Co. One of the first uses of the Shot Tower was to make lead shots for muskets in the Napoleonic Wars.

any products were produced on the site, from lead sheets, pipes and paint to Radium handling benches for local hospitals.

During World War II the Leadworks supplied the War Office with chemical lead piping and fittings, and it also received orders from the Royal Ordnance factory at Hooton, Wirral.

The leadworks were renamed Associated Lead Manufacturers in the 1950s and then later became known as Calder Lead.

Production at the Boughton site slowly reduced over the latter part of the 20th century, and finally closed in 2001 with Calder Lead moving across Chester.

We have a number of documents within our collection which chart the development and expansion of the site over the years.

Collection ZCR 245 (Associated Lead Manufacturers Ltd, Chester) not only gives us an insight into the running and structure of the company but also details of the manufacturing process. The leadworks was a significant employer in the city, and the collection contains staff records from the 1850s onwards.

Visit our catalogue to discover more about the Associated Lead Manufacturers Ltd. collection. We also hold a number of books and pamphlets documenting the history of the company in our local studies section. 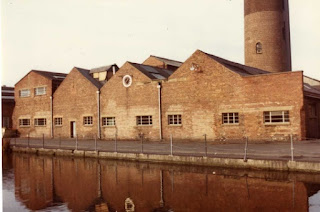 Posted by CheshireRO at 09:46 No comments:

"A rose by any other name…" can be a Peppercorn Rent!

Look up ‘peppercorn rent’ online and you will see it defined as a very low or nominal amount of money to be paid as rent, often used when renting to a family member or friend. This type of charge is not related to the value of the piece of land or building being rented, but is enough of an exchange for the purposes of a legal contract and maintains a formal landlord/tenant relationship.

One of the projects we have been working on over the past few weeks is improving and updating our online listings and while updating descriptions for of some of our earliest deeds I came across this in the DDX collection, where a rose was the charge for services:

Having asked colleagues if it was unusual for a flower to be used as payment (answer: No), I had a look for some other examples in our collections. It was not uncommon for a nominal rent payment to be requested in the form of a peppercorn, a red rose or a pair of white gloves. Here in DDS 17/13 from 1497, the initial rent is payable by a red rose at Midsummer (21st June) and a peppercorn at Martinmas (11th November):

In this document from the late C12th early C13th payment of two white gloves or one penny is requested: 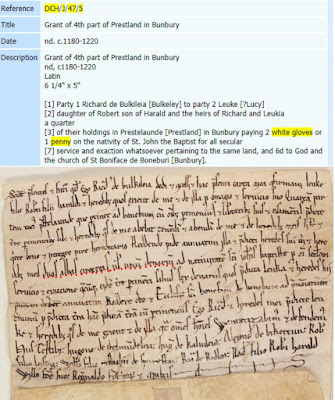 And in this deed from 1291, the land owner has asked for a pair of white gloves, a rose and a barbed arrow:

If you want to see how common these forms of peppercorn rent were, particularly in Medieval times, you can find more examples by searching our online catalogue. Go to Advanced Search and type peppercorn, red rose, white gloves or barbed arrow into the Any Text box. 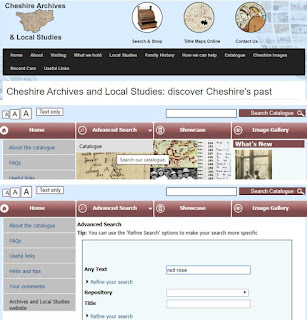 If you would like to read some other amusing examples of peppercorn rents and the feudal system of land ownership, take a look at this JSTOR Daily article. Maybe that’s why sprouts became a popular Christmas vegetable..?

Posted by CheshireRO at 06:56 No comments:

From Acres to Virgates - a History of Land Measurement!

During the past few weeks staff have been busy working on a range of projects, finding different ways for people to discover and enjoy our collections online. One particular project has been to improve and update our online catalogue listings, and while inputting descriptions on our D accessions (click here for more on these!) I came across a few unfamiliar terms for land measurement.

When looking at leases and deeds, the archaic terms used to describe units of land can be confusing. Back in the day (way back!) I remember the cover of my school exercise book printed with tables of measurement and weight, so I am familiar with the terms rod (16½ feet), chain (4 rods), furlong (10 chains) and acre (1 furlong x 1 chain, 4840 sq yd). But what are selion, bovate, virgate and carucate?

Selion is a medieval term for an open strip of land the same size as an acre (1 furlong x 1 chain). It was usually owned by a peasant, or rented to them and was used to grow crops.

A bovate or oxgang was the amount of land workable by one ox in a ploughing season, most usually 15 acres, though this could vary depending on terrain. The holder of an oxgang could be obliged to supply one ox to be used in the plough-team. 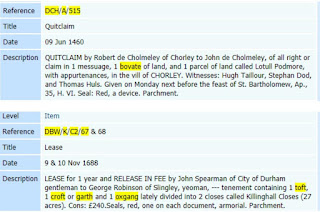 Above you can also see mentioned messuage, a dwelling house with outbuildings and land; toft, a homestead; croft, a farm or farmland and garth, a yard or garden.

A virgate was the amount of land that could be worked by 2 oxen (2 oxgangs).

A carucate was the amount of land workable by a team of 8 oxen, so a carucate was equal to 4 virgates or 8 bovates.

It is also worth noting that although an acre was supposed to be the amount of land that could be ploughed by one person with one ox in one day, here in Cheshire our farmers are bigger, stronger and more industrious, getting twice as much work done in one day than the average mortal!
A statute acre is 4,840 sq yd, but a Cheshire acre is more than double that at 10,240 sq yd. This larger acre is also seen in Staffordshire and South Lancashire and is sometimes referred to as a Forest acre. We have on occasion had searchers looking at land agreements and getting confused when their calculations don’t seem to correspond with what they are seeing on maps. Once they discover that we do things bigger and better in Cheshire then their calculations start to make sense.

Posted by CheshireRO at 07:02 No comments: