With 31st October fast approaching, we have unearthed some Halloween-related records from Cheshire Archives and Local Studies.  From accounts of witches, ghosts and mummification to old Halloween customs, here are just a few examples of spooky goings-on from Cheshire’s past.

One of Cheshire’s most famous witches was Bridget Bostock who became known as ‘The White Witch of Coppenhall’ in the 1740s.  She was known to cure ills and cast out devils by a combination of prayer and magic – the latter effectively being the use of her own saliva!  Reports of her healing abilities made the London press, and many people’s accounts of her activities feature in our Local Studies collection, such as this extract from a letter to the Whitehall Evening Post in 1748:

"Old Bridget Bostock…hath, in her life-time, made it her business to cure the country-folks, her neighbours, of sore legs, and other disorders; but her reputation now seems so wonderfully to increase, that people come to her from far and near…She cures the blind, the deaf, the lame of all sorts, the rheumatic, King’s evil [scrofula], histeric fits, falling fits, shortness of breath, dropsy, palsy, leprosy, cancers, and, in short, almost every things, except the French disease [syphilis], which she will not meddle with, and all the means she uses for cure is, only stroking with her fasting spittle, and praying for them.”

The letter claimed that between six and seven hundred people a day were seen by her; “some people grow well while in the house, others on the road home; and, it is said, none miss”.


We also have accounts of witches who were said to have done evil, with examples of prosecutions of so-called witches contained in church court records.  The Consistory Court was responsible for the moral welfare of citizens and was held in Chester Cathedral.  Our Consistory Court archives include a 1627 Tarporley libel case of an Emma Mosse being accused of “practising witch craft and making potions” (reference EDC 5/1627/62); another case where a John Ramsden of Newchurch claimed a witch “did witch my cow to death” (ref: EDC 5/1613/66); and at Nantwich in 1662, an Anna Wright was accused of killing a child by witchcraft, with the rather gruesome description that "her eyes hanged over her cheeks and sometimes would play on her forehead and sometimes up and down on her face like two bladders." (ref: EDC 5/1662/63).


Cheshire Archives holds coroners’ inquest files dating back to the fifteenth century, and includes one relating to Elizabeth Powell, a widow.  She died from various ailments after a long period of detention: she spent the last six years of her life a prisoner in Northgate, Chester, on a charge of witchcraft. 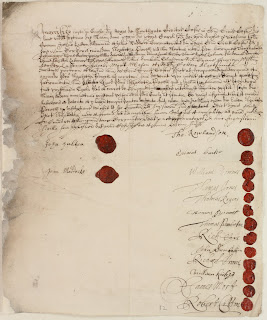 Back in the seventeenth century, those convicted of witchcraft could be subject to capital punishment, and a register from St Mary on the Hill Church records the burial of ‘three witches’ executed at the Michaelmas Assizes in Chester in 1656.  According to a book in our Local Studies collection, (Death in Chester by Roy Wilding, ref: 217345) Ellen Beech and Anne Osboston of Rainow, and Anne Thornton of Eaton, all pleaded not guilty, but were sentenced to be hanged by the neck.  St Mary’s was close to Chester Castle, only separated by a deep ditch, so it was used as the burial place of prisoners condemned to death at assizes held at the castle.  The burial register also records some other gruesome deaths, such as those caused by the torture of ‘pressing’. 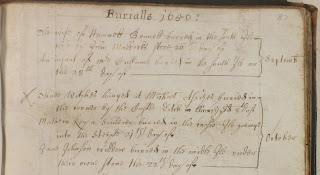 Some executed prisoners are said to be amongst Chester’s many ghosts, reputedly haunting everywhere from the city’s streets to houses, churches to pubs - but our Local Studies collection covers tales of ghosts, witches, myths and legends from all across the county.  You can read about The Congleton Cannibal, The Seven Sisters Curse and The Headless Woman of Tarvin, to name only a few! (In Myths and Legends of Cheshire by Paula Manley, ref: 228056) 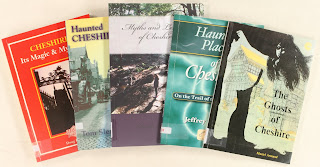 There are several books about Cheshire customs, including traditional ‘Mummers’ Plays’ which have taken place across the UK and beyond for centuries.  In Cheshire they were known as ‘Soul-Caking Plays’ and took place on All Souls Day, just after Halloween.  We have many archive items on this subject, such as play scrips and numerous photographs of soul-cakers in Halton around 1885 (ref: D5154/124), and in Antrobus from the 1920s to the 1950s (ref: D5154/119), but this photograph - complete with masked man and headless woman – shows a scene from a pageant play written by the Vicar of Tarvin, the Rev. Maurice Hill Ridgway, in the 1930s. 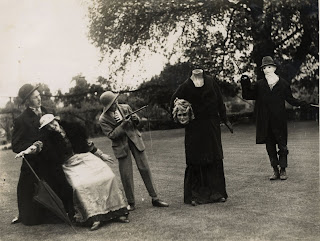 Our collection of his papers also includes a newspaper clipping of this scene marked ‘Echo’ (possibly the Cheshire Echo newspaper) with the caption “Mrs Bracegirdle fainting into the arms of Mr Ebenezer Bracegirdle on seeing the ghost of the headless woman – a scene in the pageant-play, ‘The Haunted House – Perhaps!’, written by the Vicar of Tarvin, the Rev. M. H. Ridgway, and which is based on a local ghost legend.”

Not all of our gruesome stories are myths, however.  We hold a large collection of newspapers, some going back centuries, in which there are many unusual stories such as reports of a mummification in the 1920s.  Under the headline “Amazing Discovery at Nantwich”, the Chester Chronicle of 27 March 1926 reported that a Crewe auctioneer, acting under a county court bankruptcy order, had to force entry into the house of a mother and three daughters after all other means of gaining access had failed.  The mother was last seen years earlier, and the daughters lived as recluses.  The auctioneer discovered a skeleton wrapped in paper and old rags, and a table set out with food.  He was told, “that is God’s table, and is for mother” and warned not to enter another room as there was “fire and brimstone” inside.  All rooms apart from the kitchen were locked up, and the sisters said that they lived in the kitchen with their deceased mother.  They were reported to have been “certified insane”, believed to be suffering from a religious mania, and taken to the county asylum in Chester.  A doctor at the inquest stated that Mrs Nixon’s body was found in a sitting position on a tilted chair, tied with a cloth belt.  It was completely mummified. 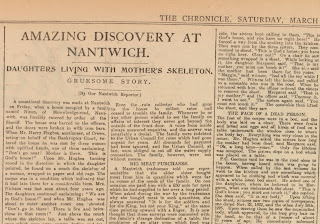 Finally, on a happier note, we have an account of a Cheshire man’s experience of Halloween customs in America.  Cheshire Record Office holds the papers of Frederick William Latham from Crewe, the son of a railway clerk who was put through college in the USA by a wealth uncle based in Mexico.  The letters he sent home to his parents include the following description from November 1927 of Halloween activities in the USA: 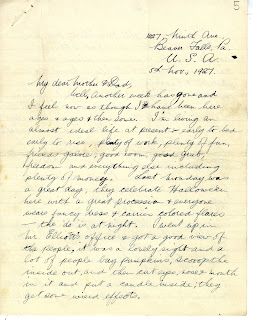 “they celebrate Halloween here with a great procession and everyone wears fancy dress and carries coloured flares – the ‘do’ is at night…it was a lovely sight and a lot of people buy pumpkins, scoop the inside out, and then cut eyes, nose and mouth in it and put a candle inside; they get some weird effects.”

We wish you a Happy Halloween!


All of these items and more are available to view at Cheshire Record Office in Chester.