June 1919 at the Sailors and Soldiers Rest

This blog post was written by our volunteer Susan Chambers. 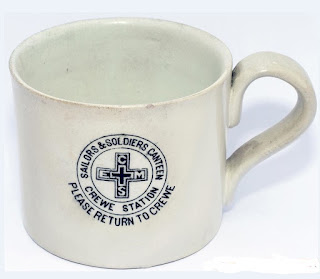 The visitors' book from the Sailors and Soldiers Rest at Crewe Station (D 4998) records over 1600 troops passing through in June 1919, many of them jotting down various comments alongside their names and service details. Some were travelling to and from various Army bases from all over Britain, (eg Sniggery, Lark Hill, Aisne Barracks) and many were returning from Europe and further afield: Dublin, Cologne, Mons, Constantinople, France, India, Mesopotamia, Salonica, Palestine, Eastern Turkey, Alexandria, North Russia to name a random few.

Sailors from HMS Caesar, Dauntless, Valkyrie, Erin, Caledon, Conqueror, Lion, HM Submarine L17, Minesweeper Buckie, were calling at the Rest, no doubt for the endless supply of mugs of tea!


The visitors books are a fascinating source of information on the aftermath of the Great War, and the time it took to disperse the troops since the Armistice; and so many of them were off to deal with other problems in the world, such as Ireland, India and Russia.

A number of Canadian troops based at Kinmel Park Dispersal Camp (near Rhyl), were passing though the station after having had a brief  break before sailing home. Several soldiers had died in early March in a riot at Kinmel, prompted by their frustration at the slow progress in repatriating them, which entailed  a complex business of medical testing, clothing and equipment issue, and long administrative form-filling, after which they were sent on leave before returning to Kinmel ready to set off for Canada.

However on their return to camp they often found that their allocated sailing was cancelled because of strikes or unavailability of a ship (or even preference given to Americans, it was suggested).  The incidents in March had stemmed from their bitter frustration.

Comments from the Canadians included:
‘another week to stop in British Isles’

‘me for that next boat to Canada’

‘Coming back off last eight days leave with Big head to be Demob.’

‘Returning to “Gods Country” next sailing’

Some of the Canadians signed themselves as being from the ‘Little Black Devils’ (Royal Winnipeg Rifles).

Several men from the 3rd battalion North Staffs Regiment Band were heading for the Curragh Army Camp, County Kildare to assist with the Irish troubles;

'The above is a photo of an aeroplane out of sight’

‘I wish I was a Corporal’

On June 24th and 25th a total of twelve men of the 2nd Battalion of Seaforth Highlanders signed the book, recording that they had arrived from Fort George in Inverness and were on escort duty for German soldiers being taken from Scapa Flow to an interment camp near Oswestry. There was some confusion amongst the allies as to what would be done with the German fleet, but rather than hand it to the enemy the Germans had ‘scuttled’ their vessels (sunk them) on June 23rd:

Many men were from Prees Heath, the huge Army camp near Whitchurch, and one from the Royal Army Pay Corps noted:

'Diddled out of breakfast this morn at Prees Heath Dispersal Station due to usual Army muddling. Very glad I was diddled after enjoying your excellent fare in this establishment’.

And later the same day from an Australian: ‘Good…not the pen’ and from a Mons soldier ‘This is a fine place but a D….rotten pen’.

It’s interesting to note how often ‘civility’ is mentioned, as if the troops were not accustomed to it:

'Civility, which is a lot’

‘It is a great pleasure to be in a civilised country’,  from a Corporal in the Royal Scots just returning from Russia, and from a Sergeant travelling with him ‘No Blockhouse, No Snow, No Bolos’ (a sort of machete much used in WW1)

‘Watching others get their ticket (official discharge) is good sport, some may say, but I don’t. You soon get stricken down with the latest disease “Dispersalitis”.

‘Dinkum, everything in tip-top order’ from a member of the Royal Australian Air Force Base in Queensland.

‘Good luck to the lady who gave us the dinner, her praises I shall sing for ever & ever’

‘Any volunteers for North Russia?’

‘Happy Though Married’  ‘Happy and not Married’ followed by ‘Lucky boy’